What is MR Fluid 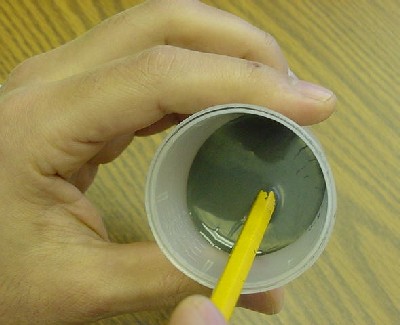 Above, MR fluid prior to magnetization. Below, the fluid turned into a solid after it was magnetized. Notice the shiny surface of the liquid in the top photo and the dull surface in the bottom photo.

Looking at it in a beaker, MR fluid doesn't seem like such a revolutionary substance. It's a gray, oily liquid that's about three times denser than water. It's not too exciting at first glance, but MR fluid is actually quite amazing to watch in action.

A simple demonstration by David Carlson, a physicist at the North Carolina lab, shows the liquid's ability to transform to solid in milliseconds. He pours the liquid into the cup and stirs it around with a pencil to show it's liquid. He then places a magnet to the bottom of the cup, and the liquid instantly turns to a near-solid. To further demonstrate that it's turned to a solid, he holds the cup upside down, and none of the MR fluid drops out.

So, what is it that gives MR fluid its unique ability to transform from liquid to solid and from solid to liquid quicker than you can blink an eye? The carbonyl iron particles. When a magnet is applied to the liquid, these tiny particles line up to make the fluid stiffen into a solid. This is caused by the dc magnetic field, making the particles lock into a uniform polarity. How hard the substance becomes depends on the strength of the magnetic field. Take away the magnet, and the particles unlock immediately.

While scientists have just recently discovered many new applications for MR fluid, it has actually been around for more than 50 years. Jacob Rabinow is credited with discovering MR fluid in the 1940s while working at the U.S. National Bureau of Standards (now the National Institute of Standards and Technology).

Until about 1990, there were few applications for MR fluid because there was no way to properly control it. Today, there are digital signal processors and fast, cheap computers that can control the magnetic field applied to the fluid. Applications for this technology include Nautilus exercise equipment, clothes washing machine dampers, shock absorbers for cars and advanced leg prosthetics.

In the next section, we will look at the seismic applications of this MR technology, which may have the biggest impact on saving lives and preventing the collapse of buildings.

Earthquakes in the News