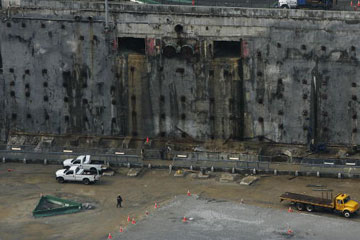 When terrorists crashed two airliners full of jet fuel into the World Trade Center (WTC) on Sept. 11, 2001, the resulting inferno, coupled with structural damage, caused what were then New York City's tallest skyscrapers to collapse and disintegrate into a mound of smoking rubble [source: NIST]. But amazingly, after the gray dust settled and engineers were able to probe the wreckage, they discovered that a critical part of the WTC complex had somehow survived. The slurry wall -- a 3-foot-thick (91 centimeters), below-ground, concrete structure surrounding the World Trade Center, designed to keep its basement levels from being flooded by the Hudson River -- remained in place [source: Nelson]. According to Arturo Ressi, an engineer who worked on construction of the barrier back in the mid-1960s, the survival of the slurry wall was a real blessing. In an interview with the 9/11 Memorial Museum, he explained that had that wall collapsed, the entire New York subway system might have flooded, and the loss of life could have been exponentially worse [source: 911memorial.org].

As workers at what came to be known as "Ground Zero" excavated the 1.2 million tons of steel and rubble that remained of the collapsed buildings, they worked around the slurry wall with great care, gingerly removing the debris that supported it when the buildings disappeared, and carefully reinforcing the wall with steel cables to prevent its collapse [source: Glanz and Lipton]. But even after the last of the rubble and tangled steel was cleared, Daniel Libeskind, the architect heading the redevelopment of the site, pushed to keep a portion of the original slurry wall in place. Though it no longer served its original practical function, the slurry wall had taken on greater importance as a memorial. In one sense, it was a tribute to American ingenuity -- to the architects, engineers and workers who accomplished the miracle of designing and constructing the tallest skyscrapers in New York City on the soft, porous surface of a landfill. It also stood as a remaining fragment of the tragedy, an iconic spot where Americans could mourn the lives that were lost. And finally, as part of the new complex -- arising like a phoenix from the ashes of the fallen towers -- the slurry wall was a testament to the determination and resilience of a nation. As Leibeskind put it, the slurry wall was a document "as eloquent as the Constitution itself" [source: Dunlap].

But before we get into the slurry wall's ultimate identity as a memorial, let's go back to its birth. How was this particular slurry wall conceived, and what important role was it to play for the Twin Towers?

The story of the slurry wall starts in the mid-1960s, when the Port of New York Authority decided to build a pair of 110-story office towers with more than 10 million square feet of office space -- more than all of the office space in the city of Houston -- in lower Manhattan [source: Glanz and Lipton]. The site chosen by the Authority, a Lower West Side warehouse district built upon an old landfill, presented a daunting technical challenge for builders: They would have to dig a huge hole, six stories into the soft soil, to reach bedrock that could support the heavy foundation of the towers. But before that, they had to figure out a way to make the hole totally waterproof, so that the powerful tide of the Hudson River wouldn't seep through the porous ground and flood the hole during construction. "If the big hole were dug at the site without some protective measures, it would quickly become a reservoir," a circa 1966 New York Times article explained [source:Phillips].

The only way to keep that from happening was to put a waterproof barrier in place to protect the hole that would eventually become the World Trade Center basement. But digging a 60- to 80-foot-deep (18 to 24-meter-deep), narrow trench and then pouring a concrete wall also was a tricky proposition because the soft, moist soil would collapse on the excavation. Fortunately, the builders discovered there was a way around that problem. Back in the late 1940s, Italian builders, inspired by oil well drillers, had developed a technique called slurry trenching. As they dug a deep, narrow trench, they coated the sides of the trench with a mixture of powdered clay and water that had the thickness of buttermilk. The gooey coating plugged any leaks that developed in the soil; it prevented water from seeping through the soil, causing the soil to collapse into the trench. Once the digging was completed, the builders would then push pipes down 60 or more feet (18 meters) into the slurry-filled trench and pump concrete into it, starting at the bottom. As the concrete filled the trench, it would displace the slurry solution -- pushing it up and out. Eventually the concrete would harden to form a wall [source: Phillips].

The World Trade Center's builders figured that once the slurry wall was in place, they could then go ahead and build the rest of the towers' six-story underground basement, the so-called "bathtub" [source: Phillips]. On the next page, we'll look at how the builders actually constructed the wall.

Why the Slurry Wall Didn't Collapse

Some people were amazed that the underground slurry wall survived the collapse of the World Trade Center, and didn't spring a leak afterward, despite being subjected to the equivalent of a small earthquake [source: Collins]. One reason it stayed intact was that the wall was built to withstand tremendous forces. As an official from the engineering firm that evaluated the damage after the attack told Newsday in 2001, the slurry wall was very solidly anchored with steel ties that went 2 feet (60 centimeters) deep into the bedrock beneath it. Originally, the slurry wall also had relied on the World Trade Center's six-story concrete foundation to support it from within. But even after the building collapsed, engineers told The New York Times in 2001, the massive pile of debris continued to press against the slurry wall and hold it in place [source: Glanz and Lipton].

The slurry wall waterproofed the area beneath the towers.
Howstuffworks.com

The slurry trench method seemed like the answer to the problem that the World Trade Center's builders faced, but there was one catch: The technique had been used in the United States only twice before -- and never on a project of this colossal scale. In 1964, while the project's plans were still being finalized, the Port Authority sent an engineer named George J. Tamaro to Italy on a work-study assignment to learn as much as he could about using a slurry trench to build a waterproof wall. Three years later, it was Tamaro himself who headed the construction of the World Trade Center's slurry wall enclosure [source: Tamaro]. An Italian engineer, Arturo Ressi , also was brought in to work on the project [sources: Ressi, Phillips].

The first step in the process was to use drills and digging machines called clamshell buckets to chew through the soil and whatever obstructions were in the way, such as timbers from old wharves and piers and wrecked ships that had been buried beneath the surface long ago. Then, a special powdered clay containing bentonite, a mineral that takes on an especially thick, gooey consistency when saturated with water, was trucked in from Wyoming. The clay was mixed with water to make the thick slurry, and the mixture was applied to the walls of the trench. Eventually, the slurry was replaced with concrete, which hardened to form a solid waterproof wall [source: Phillips, Gutberle]. When the 3-foot-thick (91-centimeter) underground wall was completed, it stretched for 3,500 feet (1,066 meters) around the basement of the towersand reached down in some spots as many as 80 feet (24 meters) [source: Tamaro].

One of the most complicated parts of building the wall was working around the 100-year-old train tunnels. In some places, the bottom of the slurry wall was up against the top of the tunnels, which were carved partly into the bedrock. For example, along the West Street section of the wall, the slurry wall projected out to cover the train tunnels, and was cast against the iron ring that enclosed the tunnel and was socketed to the bedrock on either side of it to create a watertight seal. To provide additional lateral support, 1,500 high-strength steel anchors were hooked into the slurry wall and then driven 35 feet (10.6 meters) into the bedrock and grouted in place. Each anchor could handle a load of between 100 and 300 tons, which enabled the anchors to support that section of the slurry wall against pressure from the groundwater [source: Tamaro].

The slurry wall was built to be tough, and it turned out to be strong enough to survive the collapse of the towers it'd been put in place to protect. How did it wind up becoming a memorial to the Twin Towers and the people who died there tragically on Sept. 11, 2001?

When plans were laid to create a September 11 museum as part of the reconstruction of Ground Zero, it seemed obvious to many that at least part of the original slurry wall had to be included in the memorial. As Stefan Pryor, president of the Lower Manhattan Development Corporation, explained to The New York Times in 2005: "Now that the slurry wall has been laid bare and infused with meaning, it's our obligation to preserve it and ensure that all who come to the site have the opportunity to view it and pay tribute at it" [source: Dunlap].

The museum's construction budget only allowed the builders to spend $11 million to include a small section of the original slurry wall, consisting of three 20-foot-wide (6-meter-wide) panels. According to a 2008 New York Times article, the process of protecting the slurry wall from damage during the reconstruction project was elaborate. All the digging around the wall was done manually, for extra care. A new concrete liner was poured in front of the original slurry wall to strengthen it from caving in or leaking, and high-strength steel cables were put in place to give the support that the towers' basement once provided. Additionally, to protect the slurry wall's surface from deterioration, it was covered with a protective coating of liquefied concrete known as shotcrete [source: Dunlap].

But museum officials hope the end result will be a moving experience for visitors. Museum president Joseph C. Daniels told The New York Times in 2008 that he envisioned the slurry wall becoming as iconic as Jerusalem's Western Wall, also known as the Wailing Wall, the last remaining section of the city's Second Temple and a sacred spot for members of the Jewish faith. "The idea of being able to get that connection, which will link you to the past, is important," he said [source: Dunlap].

The Geology of Ground Zero

The World Trade Center was built just west of where the first Dutch explorers landed in 1614, on a landfill that had been amassed over several centuries of Manhattan's evolution. The composition of the landfill varied from east to west. At the east end, it was mostly sand, silt and crushed rock, atop a surface of bedrock about 65 to 80 feet (19.8 to 24.4 meters) below. To the west, the mix changed to soft river mud, atop a layer of sand, silt and rock, with bedrock at depths of 55 to 75 feet (16.7 to 22.8 meters). Groundwater flowed through the landfill within several feet of the surface. Additionally, the landfill contained bits and pieces of demolition debris from old buildings, abandoned vessels and cargo, garbage, and old utility lines [source: Tamaro].