by Becky Striepe
Prev NEXT
3 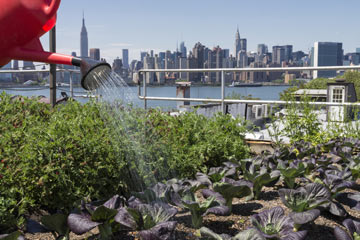 A vegetable garden on a rootop in Brookly, N.Y. Ingenious ways have been found to grow crops in cities.
Siegfried Layda/Photographer's Choice/Getty Images

If we're going to feed 9 billion people, we need to grow food in more places. Urban farming takes advantage of unused and blighted urban areas to grow food. With more than half of the world population now living in urban areas, it makes sense to start growing food where more and more people are living [source: Southern Innovator].

In Cuba, for example, urban farming has transformed city areas, creating jobs, and producing most of the vegetables that the people in its cities consume [source: Southern Innovator]. Cities like Havana saw an explosion in urban farming in the '90s, when the collapse of the Soviet Union made fuel prohibitively expensive. People in Havana had to stop relying on food from far-off farms and growing food in the city where they lived. Today, urban farmers cultivate almost 90,000 acres (35,000 hectares) of vegetables in Havana alone [source: Koont].

In the U.S., Detroit is seeing an urban farming renaissance. As the city's economy has declined, there have been more and more vacant lots and abandoned properties. Detroit urbanites are transforming those blighted areas into thriving city farms to feed themselves and poor people in the city [source: McIntire-Strasburg].

Not all cities have huge expanses of vacant land, and that's where vertical farming comes in. Vertical farming refers to growing food on rooftops and even on walls, using vertical space to grow more food with less acreage. In Vancouver, Alterrus Systems is converting a parking garage into a lettuce farm, for example [source: Fong].

Urban farming is often small-scale, so it can help us produce more food, but needs massive buy-in from city-dwellers to make a larger impact. Not all cities make urban farming easy, either. In Drummond, Quebec, a new ordnance decrees that only 30 percent of a garden can be given over to vegetables [source: Grist].