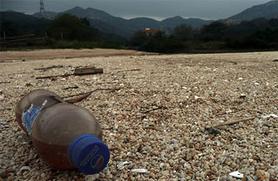 What Is the Pacific Garbage Patch?

Simply put, it's a swirling mass of plastic in the middle of the Pacific Ocean that's big enough to qualify as the planet's largest landfill. Roughly located in an area between 135° to 155°W and 35° to 42°N, much of the world's trash has accumulated in this part of the Pacific Ocean based on the movement of ocean currents.

How Does All That Plastic Get to the Ocean?

People create, consume and carelessly toss plastics, and the litter ends up in the water ways. As the plastic reaches the shoreline, currents carry it out into the ocean and a convergence of currents swirl the plastics into one general area.

No one is guiltless when it comes to the Pacific Garbage Patch - if you consume and discard goods, you are responsible for some portion of the plastic that is ending up in the ocean, even if you live hundreds of miles from the seaside. All rivers lead to the sea. Trash that ends up in a stream in the middle of the U.S. can end up in the ocean and, with the help of ocean currents, find itself in the middle of a trash vortex.

What's the Impact of Marine Litter on Wildlife?

The plastics found in the ocean have a dire effect on marine life. Turtles confuse plastic bags for jellyfish, and birds confuse bottle caps for food. They ingest them but can't digest them, so their stomachs fill with plastic and they starve to death, even though they continue trying to eat.

Additionally, fish on the low end of the food chain consume tiny bits of plastic, and they're in turn eaten by larger fish that we catch and eat. So we're now quite literally eating the plastic we produce. Not an appetizing thought.

Charles Moore gave an excellent TED talk about the floating vortex of death:

How Much Plastic Is in the Pacific Garbage Patch?

We have no idea. We have estimates on the size of the patch, at least in terms of surface area. Researchers peg the trash gyre to be as large as the continental United States, and according to the original HowStuffWorks article, every square mile of ocean hosts 46,000 pieces of floating plastic, and plastic constitutes 90 percent of all trash floating in the world's oceans. Researchers have been stunned at how much they find when they get out there to assess the damage we're doing to one of our most precious resources.

What's worse - the Pacific Garbage Patch is not the only trash vortex out there. There are five - yes FIVE - trash gyres. Located in the Pacific, Atlantic and Indian oceans, the trash gyres represent what we're doing to our planet on a global scale.

Everything from fish nets to bottle caps, from the tiny pellets of plastic that are in your exfoliating face soap to old toys are all ending up floating in the sea.

UPDATE: Stiv Wilson of the 5 Gyres Project has released a preliminary attempt at an estimate on how much trash is floating out there. He estimates that there are 315 billion pounds of plastic in the ocean right now.

The point of the calculations is this: cleaning up the plastics in the ocean is a really, really big project, although that hasn't stopped some well-intentioned programs like Project Kaisei and the Environmental Cleanup Coalition from trying.

A real cleanup would be astronomically expensive, both in terms of dollars and equipment.

Can We Clean It Up?

Not really, but that's not for lack of desire to try. Many research teams have sailed out to the middle of the trash vortex to try and determine the scale of a cleanup effort. And basically, there's no practical way to do anything about it. At least not yet.

Some of the factors getting in the way of cleanup include: the area of the trash vortex is HUGE; the plastic is in various states of decomposition, and some pieces are too tiny to collect; the ocean is deep and the plastic is floating from the surface all the way down to the murky bottom; the amount of fuel it would take to get ships out there to capture the plastic would emit so much carbon dioxide into the atmosphere that the pros of a cleanup are greatly reduced by the cons; the types of plastics are mixed so recycling them into anything usable would be difficult if not impossible.

However, some ideas for what to do with the plastic include incinerating it for power generation. That could potentially offset the amount of energy spent on hauling it in from the middle of the ocean, but for now, it's still just a concept idea.

What Can We Do to Stop It From Getting Worse?

Leah Lamb is one activist who has made a pledge to remove every piece of plastic she's responsible for from the Pacific Garbage Patch. She's a diver, and each time she goes out on a dive, she tries to bring back as much plastic as she can find mucking up the waters where she swims.

It's a great idea and a great start, but there are loads of ways to help keep the garbage patch from growing that have nothing to do with heading out to sea.

The Ocean Conservancy gives a list of 10 tips for helping out:

What Are Single-use Plastics and Should They Be Banned?
Ohio Residents Fight to Give Lake Erie Legal Rights
Ocean Plastic Once Choking Chile's Shores Now in Patagonia's Hats