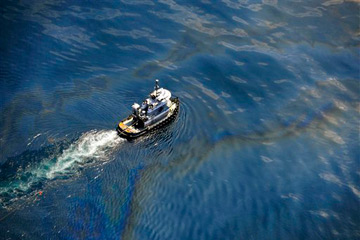 This aerial image of the oil spill was taken on May 6, 2010, just a few weeks after the initial disaster.
AP Photo/U.S. Navy, Mass Communication Specialist 1st Class Michael B. Watkins

On April 20, 2010, a combination of mud, seawater and gas from methane hydrates erupted from the oil well of the Deepwater Horizon oil rig. The Deepwater Horizon was a semisubmersible platform searching for oil deposits. Once it found oil, the workers on board the rig capped the newly-drilled well in preparation to move on in search of more oil.

The oil rig floated in more than 5,000 feet (1,524 meters) of water in the Gulf of Mexico. The well itself went much deeper -- more than 13,000 feet (3,962 meters). The workers on the rig and the companies involved -- BP, Transocean and Halliburton -- say that there was some disagreement on the capping procedure. Normally, at least two cement plugs would be poured and hardened in the piping before removing the drilling mud from the well bore. The mud helps block sudden bursts of gas and oil.

Ultimately, engineers decided to remove the mud before adding a second cement plug. A burst of gas rushed up the pipe and caused a massive explosion, killing 11 of the workers in the process. Oil began to pour out of the well in enormous volumes -- estimates of the amount of oil spilling into the Gulf of Mexico range from 12,000 to 60,000 barrels of oil per day. A barrel of oil is equal to 42 gallons (159 liters).

A BP document revealed that in a worst case scenario, the oil well could spill as much as 100,000 barrels of oil into the ocean per day. At the time of this writing, two months after the initial explosion, oil is still gushing into the Gulf of Mexico. Oil recovery efforts have reduced, but not eliminated, the total amount of oil hitting the environment.

What is the environmental impact? It's difficult to estimate. Because the oil spill happened in deep water miles from land, the oil spill isn't affecting the shore the same way the Exxon Valdez disaster did years ago. Some of the oil clumps together to form tar balls. These balls of tar can wash up on beaches and impact the local wildlife. Plumes of oil are drifting thousands of feet beneath the ocean's surface. The impact this oil might have on deep sea life isn't fully understood. There are complex ecosystems deep beneath the ocean that might die out as a result of being flooded with oil.

State and federal governments are spending millions of dollars in an attempt to contain the oil spill while engineers try to find a way to stop it. BP abandoned an attempt to plug the oil well with mud -- the so-called top kill procedure -- when engineers began to worry about the integrity of the well bore itself. If the well bore has leaks along its length, oil could continue to spill even if the top is plugged with mud.

Engineers estimate that a fix to the problem may not be possible until August -- four months after the initial explosion. With a permanent fix eluding BP and the government, the next response is to try to capture as much oil from the well as possible before it can spread throughout the environment. According to Admiral Thad W. Allen of the U.S. Coast Guard, the goal of the effort is to have systems in place capable of siphoning off 60,000 to 80,000 barrels of oil each day.

It may be years or even decades before we know the extent of the environmental damage the Deepwater Horizon accident caused. While rescue efforts are working hard to minimize the effects, it's clear that there's no way to estimate the harm this oil spill will do to the environment.

For more information on oil spills and other related topics, take a look at the links on the next page.