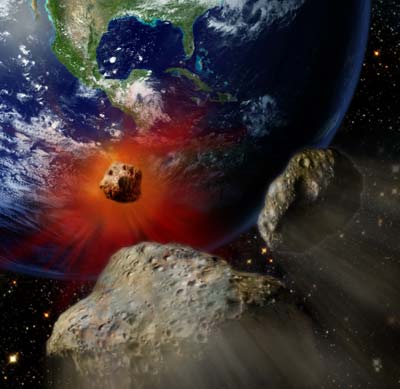 An asteroid collision off the coast of Central America was a big contributor to the disappearance of dinosaurs. See more pictures related to dinosaurs.
©iStockphoto/duuuna

Dinosaurs, according to the prevailing scientific theory, met their dramatic end after an enormous asteroid hit the Earth near what is now Mexico. It's easy to imagine that this mass extinction, known today as the Cretaceous-Tertiary Mass Extinction event, or K-T event, left nothing recognizable alive on Earth. The impact itself was catastrophic, though it probably had some help from volcanoes and other factors in wiping out 70 percent of all life on the planet [source: NASA Jet Propulsion Laboratory].

The dinosaurs were, of course, the most famous of the life forms that died out post-asteroid. But other reptilian animals became extinct as well. These included aquatic reptiles like plesiosaurs, ichthyosaurs and mosasaurs. The first vertebrate animals ever to learn to fly by flapping their wings -- the pterosaurs -- vanished after the K-T event, too. So did 90 percent of algae species and vast numbers of oceanic invertebrates [source: University of Bristol]. Life was, quite literally, not the same.

­But some types of animals weren't hit nearly as hard. At least a few members of about 84 percent of marine families and 82 percent of land vertebrate families made it through [source: Space.com]. In fact, so many life forms survived the K-T event that it would take a textbook to describe them all. Many of these animals have descendants that live tod­ay.

Some of today's species look a lot like their Mesozoic counterparts. Others are the few surviving members of scientific families that lived millions of years ago. And then there's the theory about dinosaurs that survived the K-T event by evolving into birds, which you can read more about in How Dinosaurs Work.

So, aside from birds, which of today's animals walked, crawled, slithered or swam alongside dinosaurs? Next, we'll look at the land animals that shared territory with the terrible lizards and their contemporaries. 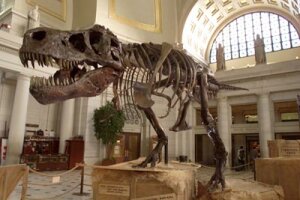