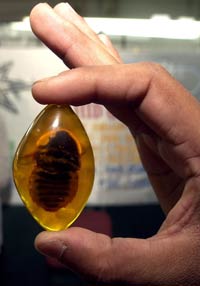 Burying a body in sediment isn't the only way to make a fossil. In fact, some of the world's most dramatic fossil finds haven't involved sedimentary rock at all. Here's a look at some of the other natural methods for preserving the remains of living things.

If an animal dies in a dry, protected location, like an arid cave, its remains can dry out, or desiccate. These fossils are sometimes known as mummified fossils, although they haven't gone through the sort of process used to preserve Egyptian mummies. Instead, it's a little like dehydrating fruit or meat -- removing the water from the body makes it inhospitable to bacteria, so the remains last longer. Desiccation can preserve an organism's skin and soft tissues, which fossilization in sediment usually can't.

Another form of fossilization that can preserve an animal's entire body is freezing. As with desiccation, freezing temperatures can slow down the rate at which bacteria can invade and break down a body. A thick layer of ice or frozen soil can also deter predators. Researchers have discovered well-preserved mammoth bodies in frozen tundra and icy crevasses. Sometimes, these bodies still have their skin, hair and organs intact, giving paleontologists a more complete idea of the animal's appearance and its physiology. Freezing can preserve specimens well, but often not quite as well as desiccation.

When an animal becomes trapped in naturally-occurring tar or paraffin, its whole body can be preserved. While paraffin and other waxes can preserve an animal's soft tissue, substances like tar preserve only hard parts. A good example of this is the mammals and plants preserved in the La Brea Tar Pits in Los Angeles, Calif. The bones excavated from tar pits are often dark brown -- they've absorbed the tar through their pores. Tar and paraffin can preserve plants as well. Some life forms, including humans, have also been preserved in peat, which is composed mostly of decomposing mosses.

When an insect lands in tree resin, insects, plant debris and pollen can become encased in tree resin. The volatile components of the resin evaporate over thousands of years. First, it becomes a hard substance known as copal, and as all of the volatile compounds disappear, it turns into a hard, inert material called amber. These specimens are very useful, since they preserve the fossil's entire physical structure. Amber can also contain bubbles of water, air and gas.

All of these types of fossils, and the bones preserved in sedimentary rock, can give scientists a lot of insight into how life has developed on the planet. But paleontologists can only study what they can find. Read on to learn about how scientists find and recover fossils.

Blood from a Stone

In the last 10 years, scientists have made some surprising discoveries about dinosaur fossils. For example, N.C. State University researcher Mary Schweitzer has found what appear to be blood cells and protein in 65-million-year-old Tyrannosaurus rex bones. While some creationists viewed the discovery as proof that the Earth is far younger than 4.5 billion years old, many scientists viewed it instead as an unanswered question about fossil creation and how long soft tissue can really last.