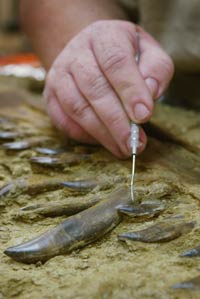 Paleontologist Michael Henderson of the Burpee Museum of Natural History in Rockford, Ill., cleans debris away from the jaw bone
Getty Images

In order to become a fossil, an organism has to die in an environment that encourages fossilization. This doesn't happen very often, and it happens only in certain environments. For this reason, the total number of fossils is extremely small compared to the number of plants and animals that have ever lived. Fossils are also far less diverse than plant and animal life -- only a small percentage of species ever become fossils. In addition to that, fossil specimens have to survive for millions of years, withstanding earthquakes, volcanic activity and the immense pressure of surrounding layers of rock.

For this reason, each fossil specimen can be important -- it has the potential to add to scientific knowledge about life on Earth. This is especially true if the fossil is of a vertebrate animal, or one with a spine. When amateur paleontologists find fossils of vertebrates, their best bet is to contact a museum or research facility for assistance. There are several reasons for this:

Experts protect a tooth of a Palaeoloxodon excavated
Getty Images

For paleontologists, excavating a fossil is a slow, careful process. Although an excavation team can use large tools and cranes to remove an entire skeleton in one large slab, removing the bones from the surrounding rock takes time and patience. For this reason, when working with large skeletons or bones, paleontologists often remove large specimens, encase them in plaster and ship them to a research facility for easier study.

Working from the exposed bone surfaces to the unexposed surfaces, paleontologists slowly flake away the rock matrix that surrounds the bone. This may sound difficult, but there's a plane of weakness between the bone and the rock. The rock will tend to break along this plane with the help of tools, like paintbrushes and dental picks. Paleontologists can also mist the rock with water to soften the sediment.

Sometimes, the fossilized bone is brittle -- so brittle that the removal process could cause it to shatter or break. When this happens, researchers will reinforce the bone with a thin glue or resin. This liquid soaks into the bone, reinforcing its structure. This step requires lots of care, since the glue can permanently attach flakes of sediment or dust to the bone.

Once the fossil is removed from the rock, scientists can determine its age using a mass spectrometer, measuring isotopes for radiometric dating. Another technique is to compare the fossil to other samples with known ages. Other tools include computerized tomography (CAT) scans and computer models. When it comes to vertebrate animals, paleontologists can also approach the skeleton like a giant jigsaw puzzle, trying to figure out exactly how the bones fit together to determine how the animal lived and moved.

The overall goal for all of this is to learn something about life on Earth. Next, we'll explore a few of the things that the study of fossils can reveal.