The Search for Fossils 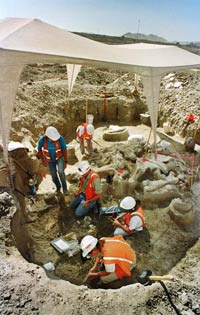 Paleontologists excavate a 30,000-plus year-old mastodon and the remains of several other extinct animals at the Eastside Reservoir Project near Hemet, Calif.
Getty Images

If you wanted to study an animal in the wild, you'd start by finding its habitat -- you'd travel to Australia to study kangaroos or to China to study koalas. The same is true for fossils. If you were looking for frozen mammoths or other mammals, you'd search glaciers, icy crevasses and tundra. To find fossils in sedimentary rock, you'd hunt for layers of rock that are the same age as the fossils you want to study. To do this, you'd consult a geologic map, which displays the locations, features and ages of rock formations.

Cartographers use data sources like aerial photographs and surveys to determine the locations and features. The rocks' ages come from radiometric dating. You may have heard of one type of radiometric dating -- carbon-14 dating, which scientists often use to determine the age of archaeological artifacts. Like all methods of radiometric dating, carbon-14 dating determines the age of a sample by evaluating the radioactive decay of specific atoms in the sample. The atoms being measured are isotopes -- atoms that are identical except for the number of neutrons in their nuclei. You can read more about this process in How Nuclear Radiation Works. The isotopes used to determine the age of rocks shed their extra neutrons until they become stable, and scientists measure the proportions of the two isotopes.

Carbon-14 dating isn't used to measure the age of fossils because its half-life -- the amount of time it takes for half of the atoms in the sample to decay -- is too short. Carbon-14 dating can determine the age of samples up to about 60,000 years old, but many layers of rock and the fossils they contain are millions or billions of years old. To determine the ages of these samples, scientists measure other radioactive isotopes, like potassium-40 and uranium-238, which are found in neighboring igneous rock. Each of these isotopes has a half-life of more than a billion years, compared to carbon-14's half-life of only 5,730 years.

Once you find the right rock, finding a fossil requires luck and a good eye. Fossilization is a relatively rare occurrence, so you can spend lots of time scouring a likely formation without finding any bones, prints or impressions. If you do find a fossil, the next step is excavation and preparation -- we'll look at what it takes to separate bone from rock on the next page.

In the 18th and 19th centuries, before the development of radiometric dating, figuring out where to find fossils was a bit of a paradox. In order to determine the age of a layer of rock, scientists studied the fossils in it and compared them to fossils found in other locations.