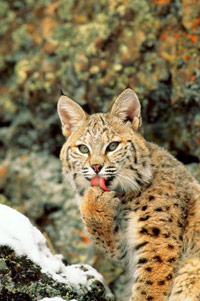 Naturally, saber-tooth cats are known for their distinctive teeth -- two very long canines that extended well past the bottom of the jaw. These canines were about twice as thick from front to back as from side to side, so they resembled very thick, somewhat curved knife blades. In Smilodon fatalis, adults' saber teeth could measure up to 7 inches (18 centimeters) long. That's about as long as the average man's hand from the wrist to the end of the middle finger.

But the cats' teeth weren't always so big. Saber-tooth cats had deciduous baby teeth, just like people and many other mammals do. The cats lost their baby teeth, including a set of miniature saber canines, before they entered adolescence. In order to reach the necessary length, their adult canines grew at a rate of about 8 millimeters a month for more than 18 months. Today's tigers' teeth grow about this fast, but the canines of saber-tooth cats grew for a longer period of time than tiger teeth do.

The sheer size of a saber-tooth cat's canines can make it seem like eating or attacking prey would be a problem. But saber-tooth cats had the ability to open their mouths very wide to make up for the extreme length of their teeth. Smilodon fatalis could open its mouth up to 120 degrees wide. This let the cats take big bites, although, according to computerized tomography (CT) scans, they used those big bites for soft flesh, not thick bones. The cats' skulls weren't designed to handle the pressure of biting through bone. They also weren't designed to provide anchors for the amount of muscle needed to hang on to struggling prey for a long time. That's one reason why saber-tooth cats tended to aim for the throat or abdomen instead of the bonier parts of their prey.

What the saber-tooth cat lacked in jaw strength it made up in physical bulk and power. These carnivores were like sturdy, squat versions of modern lions. Their legs and bodies were short and powerful, and they had a lot of muscle mass, causing them to weigh a lot more than the average lion. While a lion might weigh up to 500 pounds (227 kilograms), saber-tooth cats weighed between 600 and 750 pounds (272 and 340 kilograms). Saber-tooth cats also lacked the long tail that today's lions use for balance. This may have made saber-tooth cats stronger but less agile than most of today's big cats. The lack of a long tail is also one reason why scientists don't call them saber-tooth tigers or saber-tooth lions.

Imagine a bulked-up lion that's lost its tail and been slightly compressed from head to rear and foot to shoulder, and you've got a pretty good idea of what the saber-tooth's body was shaped like. Its color is a whole other matter, though. So far, paleontologists haven't found any fossilized remains of saber-tooth skin or fur, so there's no solid evidence of their coloring. However, based on analysis of plant fossils from the last ice age, many paleontologists believe that Smilodon fatalis had the dappled coat of a cheetah or bobcat. This coloring would have helped the cat blend in with the vegetation that was common at the time.

Fossils have also given paleontologists a few ideas on how saber-tooth cats lived and behaved. We'll look at the evidence for a social structure among saber-tooths -- and arguments that they were solitary -- in the next section.