Browse the article Why is water vital to life? 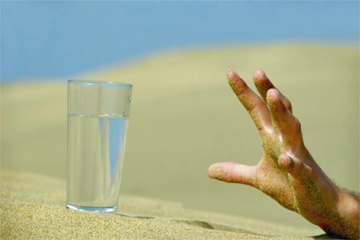 Aside from looking particularly thirst-quenching at times like these, water performs a multitude of critical jobs on our parched planet.
iStockphoto/Thinkstock

When astronomers search for life outside of our solar system, they look right past the gas giants like Saturn and Jupiter, past the torrid, rocky planets like Mercury and Venus, and past the dwarf planets like Pluto. They stop when they find an exoplanet like Gliese 581d. Gliese 581d is about 50 percent larger than Earth, and like Earth, it orbits in what's known as a star's habitable zone, the stellar sweet spot where a planet is capable of having liquid water. And where there's water, there might, just possibly, be life.

What makes scientists think that water is better at sustaining life than every other substance?

Part of the reason is that we've never discovered an organism that's proven otherwise. While some organisms need less than others -- the cyanobacteria Chroococcidiopsis, for instance, needs so little water that biologists think it may be able to survive on the arid surface of Mars -- every organism we know of needs water to survive. In fact, without water, life on Earth would have never begun. Acting as a medium in which organic compounds could mix with one another, water facilitated the formation of the planet's first life forms, possibly even protecting them from the sun's radiation.

From those simple starter organisms to the most complex plants and animals, water has played a critical role in survival ever since. In humans, it acts as both a solvent and a delivery mechanism, dissolving essential vitamins and nutrients from food and delivering them to cells. Our bodies also use water to flush out toxins, regulate body temperature and aid our metabolism. No wonder, then, that water makes up nearly 60 percent of our bodies or that we can't go for more than a few days without it.

Besides being essential for our bodies to function, water also promotes life in numerous other ways. Without it, we couldn't grow crops, keep livestock or wash our food (or our bodies, for that matter). Water has also advanced civilization, providing a means for travel for entire parts of the world and a source of power for factories. Because water can also exist as a vapor, it can be stored in the atmosphere and be delivered as rain across the planet. Earth's oceans also help regulate the planet's climate, absorbing heat in the summer and releasing it during the winter. And of course, those same oceans serve as a home for countless plants and animals.

While no one argues against the importance of water to life on Earth, it's fair to wonder if life could exist elsewhere without it. The answer is a resounding "maybe." Scientists are almost certain that, at a minimum, life requires a liquid of some sort to survive, with ammonia and formamide being the most promising alternatives. Both liquids have their own set of problems, however. Liquid ammonia only exists at extremely cold temperatures, making it unlikely that organisms could find the energy to support metabolism. Formamide, on the other hand, actually stays liquid over a larger temperature range than water, and like water, it's a solvent capable of dissolving many organic materials, but so far scientists have found little evidence that the solvent could support life.

If life forms that don't require water do exist, they'd be very different than the life found on Earth. For instance, rather than being carbon-based, such life may arise from silicone compounds. A recent study even suggests that an alternative life form might be lurking in our solar system. Researchers studying Titan, a moon orbiting Saturn, noticed that hydrogen in the moon's atmosphere wasn't found on the surface. One explanation for the missing hydrogen is that life forms are consuming it, just as we consume oxygen.

So far, however, we simply don't have enough information to say whether or not life could exist without water. We know with certainty, however, that life on Earth definitely couldn't.