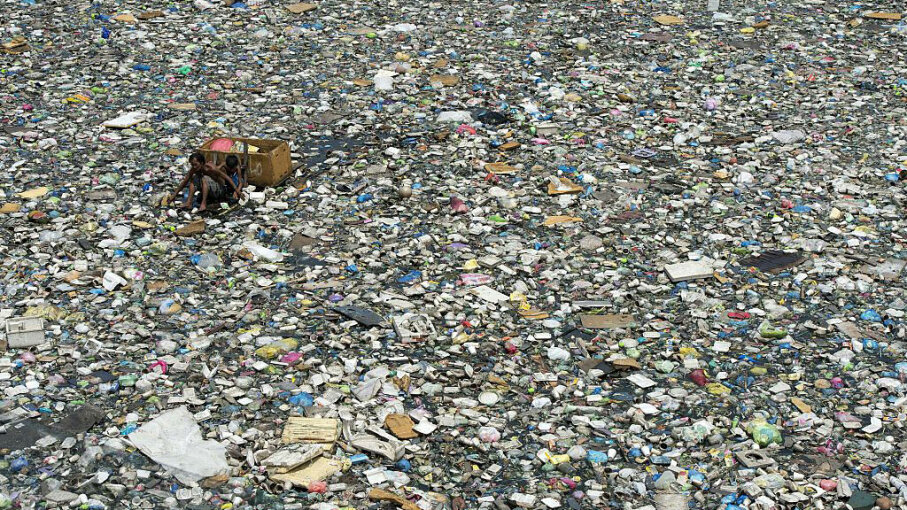 A father and son (L) on a makeshift boat paddle through a garbage-filled river as they collect plastic bottles to sell in junk shops in Manila, Philippines, on March 19, 2015. NOEL CELIS/AFP/Getty Images

For decades, we've known that the plastics we throw away — empty water bottles and grocery bags, for instance — pollute our oceans. Every year, about 8.8 million tons (8 million metric tons) of this material ends up in the deep blue sea, imperiling marine ecosystems.

Obviously, action is called for. But before we can curtail the trend, we must figure out how plastic waste travels seaward in the first place. According to some new findings, the majority of it might be hitching a ride on the world's rivers.

A comprehensive study about this topic appears in the latest issue of the journal Environmental Science and Technology. The research was carried out by a German team under the leadership of hydrogeologist Christian Schmidt.

Numerous previous studies have reported on how much plastic is generally carried by various rivers. Schmidt's team scrutinized these papers and found a "definite correlation" between how well the people who live near any given drainage basin manage their plastic waste and how much of this garbage winds up inside the local river.

A drainage basin (also known as a watershed or catchment area) is an area of land in which precipitation is sent downhill to a common outlet, such as a river. Unsurprisingly, when there's a lot of litter around one of these, its waterway will suffer. The researchers determined that the size of a waterway also influences the load of plastic it carries. Relative to small rivers, big ones contain a disproportionately high amount of plastic per cubic meter of water.

This explains another one of the discoveries made by Schmidt's team: The 10 river systems on Earth with the highest concentration of plastic debris are all large in size and located in densely populated areas where littering is common. Two are in Africa (the Nile and the Niger) while the other eight reside in Asia (the Ganges, Indus, Yellow, Yangtze, Hai He, Pearl, Mekong and Amur). By the scientists' calculations, these 10 bodies alone are responsible for a whopping 88 to 95 percent of all the plastic that's being channeled into the ocean.

"Halving the plastic input from the catchment areas of these rivers would already be a major success," says Schmidt in a press statement. "To achieve this, it will be necessary to improve the waste management and raise public awareness for the issue. We hope that our study will make a contribution to a positive development so that the plastic problem in our oceans can be curbed in the long run."

NOW THAT'S ... TASTY?
Of all the disposable plastic products out there, throwaway bottles might represent the biggest environmental threat. The Guardian estimates that around 20,000 of these are sold every minute — and most don't get recycled. In response, one startup company has developed a biodegradable bottle that you can also eat.