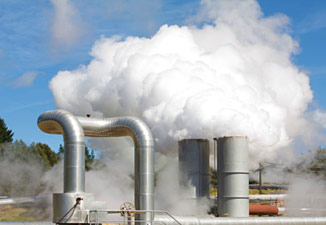 How safe are geothermal power plants? Check out these green science pictures!
iStockphoto/Thinkstock

For all our hand-wringing over the oil supply, it might shock you to realize that the solution to our dependence on fossil fuels lies right under our feet. In Western states like California, Nevada, Idaho, Alaska and Hawaii, underground pockets of geothermal energy — hot rock, superheated water and steam — can be tapped to generate electricity. According to backers of geothermal technology like Google, this carbon-neutral, inexhaustible energy source could meet 15 percent of America's electricity needs by 2030.

In the simplest geothermal power plant, called a dry steam plant, a well is drilled into the rock to tap a steam reservoir. The steam escapes the well under great pressure, which is used to turn a turbine and generate electricity.

Since steam deposits aren't as common as hot water and hot rock reserves, the most promising geothermal technology is called a binary-cycle power plant. In this system, hot water from a deep well circulates through a heat exchanger. There, the water transfers some of its heat to a secondary or binary liquid with a much lower boiling point. When the binary liquid vaporizes, the steam that remains is captured to power turbines.

The Downside of Drilling Deep

Unfortunately, geothermal power plants may have an unintended and potentially dangerous side effect: earthquakes. Whenever you drill miles into the Earth and remove material, whether it's steam, water or hot rock, you release pressure that causes the ground above the geothermal pocket to shift and subside. Even worse, the most abundant geothermal energy sources are located in areas of high seismic activity. In fact, some experts actually believe that drilling into the rocks around a fault line could trigger quakes.

In 2006, a geothermal electricity plant in Basel, Switzerland allegedly set off a series of small tremors along a fault line responsible for a devastating earthquake back in 1356. In August 2009, similar complaints of small earthquakes near a geothermal plant in Germany provoked government safety reviews and stirred fears in the community. And in California, a geothermal pilot plant called The Geysers has been linked to an unusual cluster of small quakes near its facility.

So far, none of these quakes has registered above a magnitude of 3; most go unnoticed by the public. But if geothermal energy is going to be the boon that alternative energy proponents believe, it's going to have to shake its unsettling connection with earthquakes.