Are you safe from lightning if it's not thundering? 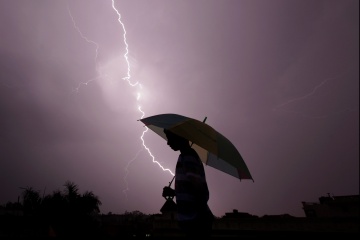 Just because you don’t hear thunder doesn’t mean you should go out for a Sunday stroll during the storm.
rakesh bakshi/AFP/Getty Images

The ability to tell when you should avoid being outside sounds simple enough. Say, if it's pouring rain, your brain might give you a heads-up that you'll get wet. Maybe it's so windy that a tree has fallen across the sidewalk: The old noggin might kick in and tell you to stay inside to avoid getting beaned by a branch. And if you're hearing thunder, you'll probably find yourself thinking it's not the best time to vigorously practice calisthenics in the yard.

And the deal really is that simple: If you do hear thunder, you're absolutely at risk for a lightning strike. That is, you're as at risk for a lightning strike as one ever is. The National Weather Service gives you pretty favorable odds, with a one in 12,000 chance of getting hit by a bolt from above over the course of your life [source: National Weather Service]. If there is thunder in the area, the only cause is lightning. But long story short, you're not going to hear thunder just because there are clouds in the area. And if lightning is present — even if you can't spot it right away — you're at risk for being struck.

A lightning bolt can travel a great distance. Strikes have even been known to occur 25 miles from the bolt's cloud of origin. This makes a lot more sense if you remember that lightning doesn't travel in a straight line down to the ground; it can reach horizontally across the sky before making contact below.

So if you are hearing thunder, be vigilant for lightning, even if you're not seeing any flashes or (more eerily) a single storm cloud. It's totally possible for strikes to occur on a clear day if a distant storm is lurking. Another thing to keep in mind is that a lightning strike can travel through ground current, so you can totally be electrocuted without even seeing the strike or being struck directly [source: Sohn; National Geographic].

Now, let's be clear: If you're seeing lightning at all, you're at risk for getting struck. You might not hear thunder if the storm is far away, but that doesn't mean you can be sure you're safe from a remote hit. The general rule is that if you don't see lightning or hear thunder, you're probably safe to go about your day and assume that you're not about to join the ranks of the roughly 270–330 people who are injured or killed by lightning strikes each year [source: National Weather Service].