by Eric Baxter
Prev NEXT
10 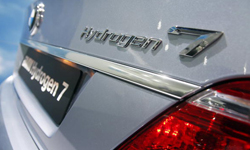 The back of the BMW Hydrogen 7 is displayed during the 2008 North American International Auto Show in Detroit, Mich.
Bryan Mitchell/Getty Images

Effective hydrogen fuel cells are the Holy Grail of alternative fuel technologies. The best known fuel cell is hydrogen-based. This technology uses hydrogen gas to create electricity. The electricity is then converted to mechanical energy in an electric motor to get the car, truck, bus, boat or any other form of transport run by an engine moving.

The only emission from the cell is water, pure H2O, clean enough to drink and a far cry from the hydrocarbons, CO2 and oxides of nitrogen produce by the cleanest car today.

Technology is currently struggling with finding an absolutely pure form of fuel cell, one that emits no harmful pollutants, as well as using renewable energy to produce or supply the raw materials for the fuel cells. Indeed, the easiest way to produce the needed supply of hydrogen gas at this point is using fossil fuels, though this may change in the future.

On May 10, 2011, Toyota Motor Sales, in cooperation with Shell Oil, announced that they had opened the first hydrogen filling station fed by an industrial pipeline. This opening signals what could be the first step in building a hydrogen fuel cell infrastructure. The hydrogen will be produced using bacteria and biomass waste.