by Eric Baxter
Prev NEXT
9 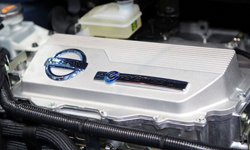 Electric cars are not as new as most drivers realize. They were among the first prototype cars created in the late 1890s, and more electric cars were manufactured than petroleum-powered cars at the turn of the last century.

Today, the electric car is going main stream. The Nissan LEAF has opened up a new market for consumers, allowing urban driving without the guilt of tail-pipe emissions. Electric vehicles receive their fuel from a linked collection of batteries. The batteries are lead, nickel-metal hydrides and lithium concoctions storing energy provided from home electrical outlets or the soon-to-be-introduced electric recharging station. Like fuel cells, electric cars lack a reliable infrastructure, as well as a way of reliably using renewable sources -- like solar, wind or geothermal -- to generate their fuel. Instead, they rely on fossil fuel-burning electric plants to supply their needs.

The EPA estimates there are more than 4,000 all-electric vehicles traveling the country's roads, though this estimate was made before the introduction of Nissan's LEAF. While fuel cell cars are few in numbers due to technological challenges, electric cars remain few in number because they simply don't have the same range as a petroleum-fueled vehicle and are harder to "fill up." However, once those hurdles are cleared, and a renewable source of electrical energy ensured, electric cars may be the primary form of transportation for the world.