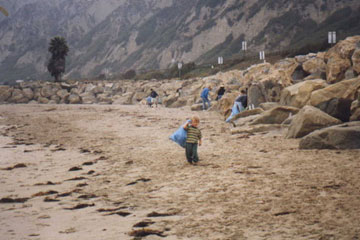 The best way to stem the growth of the patch is to use less plastic and recycle it more often.
Photo courtesy California.gov

While cleaning up the Great Pacific Garbage Patch would undoubtedly do wonders for the health of the oceans and their inhabitants, fisheries, ecosystems and food supplies, the logistics of such an undertaking would strain the resolve of the most aquatic-minded individual. Captain Charles Moore, of all people, thinks such an effort would be futile [source: Stone].

It's not that Project Kaisei's plan is particularly far-fetched -- it has its upsides and its downsides. On the one hand, it would dispose of the trash in a way that doesn't include a landfill; on the other, catching the plastic in nets would also catch and possibly harm marine life.

But these are small points. The fact is, many (if not most) experts believe the notion of any active cleanup of the Great Pacific Garbage Patch is bordering on preposterous.

The difficulty comes down to at least three main factors: cost, distance and the effects of photodegradation.

Photodegradation describes the effects of sunlight on the tons of plastic floating out at sea. Essentially, the sun's rays dry the plastic to the point that it shatters. The result is countless miniscule bits of plastic, most of which are floating below the surface, reaching down perhaps 300 feet (91 meters) [source: Berton]. There is simply no good way to pull those tiny beads out of the water. It would be kind of like trying to catch sand in a Jacuzzi tub.

An even weightier task if that Jacuzzi tub were out in the middle of the ocean where it took a week to even reach it in the first place. The garbage patch is really out there - that's why it remained a secret so long. Getting to it is a hike. It's not close to any port or any source of supplies. That makes a massive cleanup effort an extraordinarily time-consuming, fuel-consuming, resource-consuming undertaking.

In other words, it would be prohibitively expensive. Add in the $7-million-per-pyrolysis setup involved in Project Kaisei's approach, and you've got yourself a bankruptcy in the making [source: Stone].

If a full-scale, active cleanup is an unlikely end to the ocean dump, there are still other ways to at least begin to change to status quo. Job one is to stop the rapid growth of the patch, which means using less plastic and recycling more of the plastic we do use. Ultimately, though, the planet will have to make a deeper change in order to stem the flow of bottles, toothbrushes and bath beads out to sea. We'll have to move away from petroleum-based plastics and toward biodegradable substitutes in a much bigger way than we are now. Eco-plastic coffee cups aren't going to make a dent in the floating trash heap.