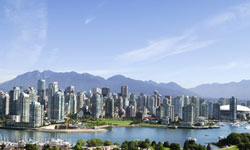 Vancouver is a coastal city, home to more than 560,000 people, and was named the world's most livable city by the Economist magazine. It's proved to be not only the most livable, but also Canada's model for using renewable energy sources.

Vancouver has an ambitious 100-year plan for clean and green living. The city already leads the world in hydroelectric energy, which currently makes up 90 percent of its power supply. It also plans to reduce its greenhouse gas emissions to levels 20 percent lower than reported in 1990 during the formation of the Kyoto Protocol. Fossil fuels will be reduced with city investments in wind, solar, wave and tidal energy systems.

Additionally as part of its energy-efficient plans, Vancouver hasn't been shy with implementing emerging technologies. Solar-powered trash compactors have sprung up around the city, each the size equivalent to a normal trashcan but able to hold five times the waste (which puts fewer emissions-spewing garbage trucks on the roads).