The Solution to Light Pollution 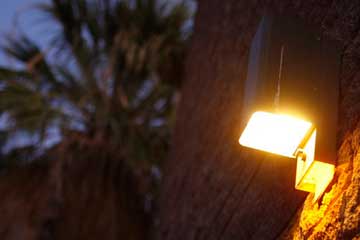 Light fixtures like this one focus the light where it's needed.
AP Photo/John Locher

Even apart from the major health and environmental improvements that would come with fixing the light pollution problem, there are many other benefits. Plus, among all the pollution issues we have on Earth, light pollution ranks right up there as one of the easiest and most cost effective to solve.

Since light pollution wastes vast amounts of money, one of the biggest perks of proper lighting would be felt in the world's collective wallet. Similarly, cutting down on inefficient and unnecessary lighting decreases the amount of carbon emissions that we shoot up into our unhappy atmosphere -- always a bonus.

So what are some of the quick fixes?

Once you've addressed your own abode, consider encouraging others to take steps as well. Billboard owners and municipality leaders are good starts, since light pollution is a major contributor to high-cost, low-efficiency operations.

Now you can turn your attention indoors, too. There are several things you can do to address the issue of bad lights in your life. For example, when it comes to personal habits, do everything you can to cut back on light use, especially as night starts to fall. A dimmer switch can be a great way to transition through artificial dusk. For late-night trips to the fridge or bathroom, consider installing a red nightlight that won't be as likely to throw your melatonin production out of whack. Make sure your bedroom is dark enough, too.

For more advice, there are many groups out there pushing for improvements in light pollution. One example is the International Dark-Sky Association (IDA). Established in 1988, it works to educate the public on the need for smarter lighting and advises those seeking it. Members in more than 70 countries act as advocates for dark skies and help develop new technologies to help the organization with its mission.

To learn more about the IDA and other initiatives, flip over to the next page.