How does polystyrene recycling work?

Browse the article How does polystyrene recycling work? 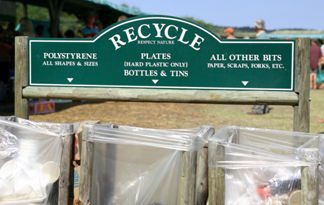 Polystyrene is easily recycled, but does the cost outweigh the benefit? Check out these green science pictures!
iStockphoto/Thinkstock

Polystyrene is one of the most common forms of plastic. You see it in take-out coffee cups and egg cartons; it's the packing material used to cushion goods for shipping. Many call it Styrofoam, though that term is actually the brand name of a rigid blue insulation made by Dow Chemical Company. Polystyrene is a very versatile material, but recycling it isn't always easy.

The term polystyrene means that the plastic is derived from styrene, a liquid hydrocarbon. When heated, monomer styrene molecules link together into long chains, creating a polymer material that's solid when it cools to room temperature. That clear, hard, brittle plastic was developed on a commercial basis in Germany in the 1930s. The material is used today for CD and DVD jewel cases and plastic forks. In 1941, Dow scientist Ray McIntyre invented extruded polystyrene foam (Styrofoam), a light, waterproof material that was first used for making life rafts. Expanded polystyrene (EPS) is another, similar foam material that has found even more uses.

Because it's about 95 percent air, EPS is an excellent insulator. That's why it's used in beer coolers and home insulation, and why the hot coffee in a polystyrene cup doesn't burn your fingers. Because it's light, EPS is ideal for creating buoyancy in life vests and rafts. Its lightness and malleability make it a good packing material, adding cushioning but little weight. Also, EPS doesn't react with other materials and is resistant to heat, so it has found wide use in the food industry in things like meat and poultry trays and the boxes that fast-food hamburgers are served in.

However, some of the same qualities that make polystyrene useful can also work against it when it comes to recycling. Its lightness means that it's hard to collect from curbside containers -- it often blows away, becoming litter. Because it's bulky, it's difficult and expensive to transport. Many municipal recycling programs do not accept it (a few, like Los Angeles and Toronto, do).

One of the problems of all plastics recycling in general is that you have to gather the same types of materials together and sort them by their material container code -- a number usually found on the bottom of the container that makes it easy to identify the type of plastic in the object. Some other plastics -- like 1 (used for soda and water bottles), 2 (laundry detergent and other containers), and 4 (plastic bags) -- are easier to isolate. Polystyrene, which is number 6, presents more problems. While water and soda bottles are relatively clean when discarded, polystyrene used for food is often mixed with paper, food scraps and other types of plastic, like the straw that's thrown away with an EPS cup.

Polystyrene usually can't be recycled locally but has to be transported to a centralized plant, increasing costs to the recycler and reducing the incentive to recycle. Also, recycled polystyrene cannot in most cases be used for products that contact food because of health concerns, even though the material is usually sterilized by the recycling process. Recycled EPS might be used instead to create packaging or other materials, but new EPS is always needed for coffee cups and plates.

So what's the best way to recycle polystyrene and why might bacteria someday play a role in the process? Read on to find out.

The polystyrene industry claims a recycling rate of about 12 percent, according to the Alliance for Foam Packaging Recycling, but that includes scraps from EPS manufacturing, which are immediately reused. The fact is that it's often easier and cheaper to produce new polystyrene than it is to collect, transport and process material for recycling.

The most direct way for consumers to recycle polystyrene is to reuse it. This method doesn't work as well with coffee cups and plastic forks, but it's ideal for packaging materials. Packing peanuts can simply be collected and used again. Shippers may take rigid packaging and chop into small pieces to use as loose packing. UPS accepts packing peanuts from the public for reuse.

Used polystyrene can also be reprocessed for use in creating other products. For example, the Dart Container Corporation, the largest producer of polystyrene food containers, has four plants in the U.S. and Canada that receive EPS from schools, supermarkets, hospitals and other users. Here's how the reprocessing works at their plants:

Carrying truckloads of light, bulky polystyrene to recycling centers is usually not economical. Recyclers have found ways to compact the material to a more manageable size. Balers take foam packaging and compress it, reducing the bulk somewhat. Another method is to use limonene, a natural solvent made from orange peels. Limonene dissolves and concentrates EPS and can itself be reused. The chemical causes the EPS foam to "melt" without heat, reducing it to 5 percent of its original size. Thermal compaction uses heat to reduce chopped EPS to a concentrated brick that's easier to ship.

When it is burned in municipal incinerators, polystyrene yields nothing but carbon dioxide and water vapor. It's a good fuel for waste-to-energy programs that capture the heat and turn it to useful purposes, a process known as thermal recycling.

The polystyrene industry has been working to make recycling the material easier for consumers. For example, the Plastic Loose Fill Council's Web site can direct you to a nearby business that accepts used EPS packaging. Or you can call their "Peanut Hotline" to learn where to take loose EPS. Drop-off centers can also be found through the Earth911 Web site. The Alliance of Foam Packaging Recyclers allows consumers to mail in non-food EPS for recycling.

If recycling polystyrene sounds like a lot of trouble, what's the point of doing it? Read on to find out some reasons why.

An interesting use of recycled EPS is a product that looks like wood and can be used for park benches and fence posts. The material costs less than hardwood and can be used instead of woods such as mahogany and teak, which are harvested from rainforests.

Making polystyrene requires petroleum, which is a non-renewable resource. So, recycling polystyrene reduces the amount of oil needed for the manufacturing process. This is not a pure gain, of course, because some energy must still be used to transport and reprocess the material.

The most visible benefit of polystyrene recycling is in the reduction of litter both on land and in the sea. EPS, which is not affected by oxygen, sunlight or water, stays around indefinitely. Municipalities have to spend money to clean it up. That's why a number of cities, including San Francisco and Seattle, have banned EPS in take-out food packaging.

Polystyrene takes up space in landfills, where it will remain for hundreds of years. The industry argues that this is not a real drawback because modern landfills are sealed from moisture and light and are not meant to encourage biodegradation. Even organic material does not break down once it reaches a landfill.

Polystyrene also poses a threat to marine life. As it wears out over time, EPS disintegrates into tiny particles, which look like food to fish and may be eaten. The foam clogs the digestive systems of marine animals, killing them. It's estimated that EPS makes up 60 to 80 percent of marine litter, according to a 2008 review in Environmental Research. Recycling can help reduce the amount that winds up in the sea.

Recycling consumer polystyrene also prevents the material from being burned in backyard fires or burn barrels. Polystyrene can produce toxic chemicals when burned unless efficient incinerators are used.

The benefits and the difficulties of recycling polystyrene are a good example of the complex issues that can arise when we're looking at ways to conserve resources and protect the environment. The solutions, as in the case of recycling polystyrene, are not always easy. But we can't necessarily duck the question by turning to alternative materials, either. For example, the paper cup that holds your take-out coffee is usually plastic-coated and is not recyclable. Nor does it break down in landfills. Even a ceramic cup requires much more energy to produce than a polystyrene one and typically continues to use energy to heat the water needed to wash it. There may be a savings in the long run, but the choice is not as clear as it sometimes seems.