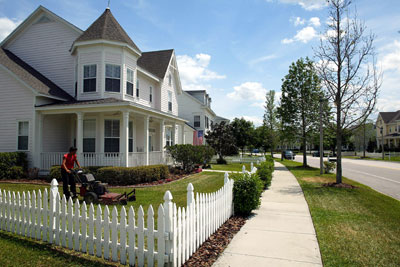 Celebration, Fla., was designed with 1940s-style homes and is a division of the Walt Disney World Resort. While it's called the new urbanism, a Celebration lifestyle is meant to thrust modern residents into the carefree living of the past.
Preston C. Mack/Getty Images

Although the pros of urban sprawl may be less numerous than the cons, it's hard to qualify which factors outweigh one another. And clearly the advantages of suburban living are pretty substantial, considering its popularity and the continuing influx of people migrating to the suburbs.

Thanks to less expensive land in outlying areas around cities, people are able to afford larger houses on larger lots. For growing families tired of shoving all their worldly possessions into tiny urban closets, this is a huge benefit. Also, it's no secret that homes closer to most urban areas are usually more expensive than homes farther out in the suburbs. Simply put, it's easier to own your share of the American Dream out in the suburbs.

In addition, better school systems are often available in the suburbs. According to the National Center for Policy Analysis (NCPA), in 1999, 73 percent of suburban New Jersey students scored "at or above" the basic reading level, whereas only 27 percent of urban students in New Jersey achieved the same goal [source: NCPA]. Of course, some of the more affluent residents can afford to send their children to private schools in urban areas, but many people do not have that luxury.

Crime rates tend to be lower in the suburbs than in urban areas, providing further incentive for families in particular to seek the white-picket fence safety of the outlying districts. In one study conducted by the U.S. Department of Justice, violent crime in cities in the period from 1993 to '98 was 37 percent higher than it was in the suburbs and 74 percent higher than in rural areas [source: Bureau of Justice Statistics].

The NCPA also asserts that the United States as a whole has plenty of land to grow on, since not even 5 percent of its total land has been developed. The organization states that urbanization is only responsible for one-fourth of the farmland lost since 1945 [source: NCPA].

On the next page, we'll discuss international sprawl and a couple of U.S. cities with interesting sprawl-related backgrounds.