Curbing the Effects of Sprawl 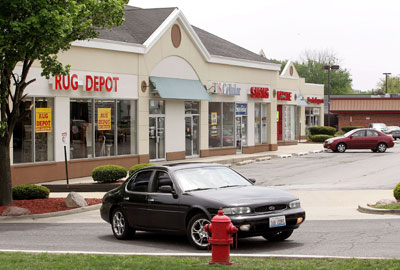 In suburbia, you can expect to see many strip malls like this one in Palatine, Ill. The closer businesses are to cities, the more rural space can be preserved.
Tim Boyle/Getty Images

While there is no one easy solution to urban sprawl, there are numerous ideas out there as to how it can be contained or planned more efficiently, at the very least. According to those opposed to sprawl, it's often fueled by poor planning by regional and local governments. A measure called smart growth advocates reducing sprawl by fixing up run-down urban communities, building new and better communities closer to cities, and preserving open space before it's developed.

The Sierra Club proposes a number of ideas to counter sprawl, including investing in environmentally friendly public transportation as well as providing other transportation options, like walking and cycling. The group also encourages local and regional planning committees to consider transportation needs, environmental concerns and land-use goals when planning for the future. One of the main concerns of families is affordable housing, which the Sierra Club insists must be provided in close proximity to jobs and public transit. Also, the group recommends that developers be charged for the costs of public services required by sprawl, such as water and sewer lines, new roads and public schools.

Many states have already adopted sprawl-related countermeasures. For example, Tennessee now requires all municipalities to identify urban growth boundaries [source: USA Today]. Other states are even using tax incentives to encourage wealthy rural landowners to donate land to conservationist organizations or to the state in which it's located. Experts agree that individuals need to take a vested interest on a large scale when it comes to curbing the negative effects associated with sprawl. For example, commuters should carpool or use public transit to reduce tailpipe emissions that contribute to air pollution.

No matter how you fe­el about urban sprawl, it is an issue that warrants a closer examination by the powers-that-be. Are white picket fences an adequate trade-off for the displacement of wildlife? It's doubtful that anyone will ever agree. Hopefully, a realistic and attainable middle ground can be identified and reached in time.

The Internet has made it possible for activism to take place in the comfort of one's own home. Ordinary citizens anywhere can communicate with legislators and influence government policies with the click of a mouse. Visit Sprawl City for links to various activist Web sites or the David Suzuki Foundation for a helpful toolkit to get grassroots campaigns going.