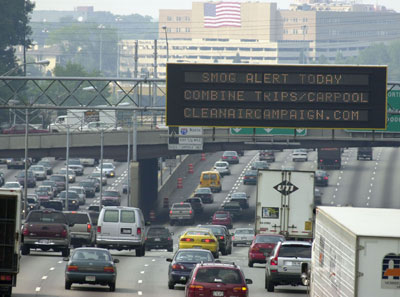 The first code red smog alert of the year is announced in Atlanta in 2003. Car and truck exhaust is a major contributor to poor air conditions.
Photo by Erik S. Lesser/Getty Images

Many people believe that poor planning by municipalities and government institutions is what has led to uncontrolled sprawl in some areas. Other researchers believe sprawl to be the unavoidable result of car-based living, or people's increasing reliance on automobiles. What's for certain is that there is no solid consensus about whether sprawl is really a bad thing after all. Here are some of the reported downfalls and the perks of sprawl.

You name it, sprawl is alleged to have caused it (although it's nearly impossible to pinpoint all of­ the blame). One of the most obvious and talked-about consequences of sprawl is the loss of farmland at a rate of approximately 1.2 million acres (500,000 hectares) every year [source: National Geographic]. Environmental devastation, including the loss of tree cover and wildlife habitats as well as polluted drinking water, is commonly attributed to urban sprawl. Water pollution is caused by an increase in hard surfaces, such as pavement, that cannot absorb rainfall or runoff the way that soil can. This causes pollutants to be diverted into water sources, rather than be absorbed by the ground. Tree cover has been reduced by more than one-third over the past 25 years in Atlanta, Chesapeake Bay and Puget Sound alone [source: American Forests].

Increased automobile usage goes hand in hand with sprawl because people live farther away from work and because business districts in the suburbs aren't built in walking distance from homes. This has caused higher levels of smog and air pollution, resulting in more cases of asthma and other respiratory ailments. Furthermore, the United States, Europe and other parts of the world affected by urban sprawl have noted that increased amounts of driving beget greenhouse gas emissions that are believed to be linked to global climate changes [sources: Public Health Reports, EEA].

Longer commutes have resulted in high levels of automobile crashes, despite safer vehicles and safe driving campaigns. According to the National Highway Traffic Safety Administration (NHTSA), lower driver and passenger fatality rates are seen in dense cities as opposed to sprawl-friendly counterparts [source: Public Health Reports]. Pedestrian fatalities and injuries may also be related to sprawl because of pedestrian unfriendly walkways and increased traffic. Atlanta, considered by many experts to top the list of sprawl-offending cities, had an increase in pedestrian fatalities despite a national decline in the amount of these accidents. Car-based living is also credited in part with obesity.

Many experts believe that urban sprawl results in higher costs for the government agencies responsible for building streets, schools, utilities and other services required to support new residents in sprawling communities. Often, these costs result in higher taxes.

On the next page, we'll examine the pros of urban sprawl.