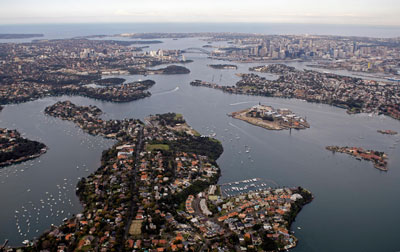 The coast of Sydney, Australia, is home to nearly 21 million people as of August 2008.
Torsten Blackwood/AFP/Getty Images

Traditionally, Europe and much of the rest of the world haven't followed the "American model of suburbia" based on suburban living and reliance on vehicles for day-to-day activity [source: New Zealand Herald]. Rather, most of these populations have trended toward urban life and suburbs located immediately outside cities instead of the sprawling areas that Americans live in. However, the European Environment Agency (EEA) reports that times are changing. Although sprawl hasn't reached the proportions in Europe that it has in the United States, it's certainly on the rise. Since the 1950s, for example, European population has grown by 33 percent, while European cities have grown by 78 percent. Sprawl in Europe is becoming especially prevalent around areas featuring strong economic activity and high levels of population density, such as Paris, northern Italy, Belgium and the Netherlands [source: EEA].

One prime example of international sprawl is in Australia, which has quickly become one of the most urbanized countries in the world -- the majority of residents living in or around the Sydney coastline. Traffic, air pollution and rising costs of living are a few of the problems blamed on sprawl in the area. As such, planners are working overtime to figure out how to handle the expected population increase of 1.1 million by 2031. One of the current plans is to build more than 600,000 new homes directly to the south and west (to ease pain on the coastline), that will be in close proximity to train and bus stations and that will also have cycling and walking trails [source: China Daily].

One major city that many people probably assume to be the biggest offender is Los Angeles. In fact, L.A. has managed to curb sprawl despite an intense increase in population. The city has accomplished this largely through zoning requirements that kept housing lots small and close together [source: Sprawl City]. Not only has land consumption in the area not increased, it actually decreased by 8 percent while L.A.'s population density was on the rise between 1970 and 1990 [source: Sprawl City]. Given the popularity of the area, sprawl would have been far worse if L.A. planners hadn't planned ahead of time by encouraging high population density through strong live, work and play incentives for residents of the city proper.

Yet another city that flies in the face of sprawl-related reason is Detroit. The city experienced a 7 percent population decline between 1970 and 1990; however, the land area consumption increased by 28 percent. This is believed to be due to factors not related to population (like crime and cost of living) that pushed people toward outlying areas around the city. Despite this seeming exception to the population growth rule, Census Bureau data still shows that cities experience population growth sprawl at a much faster rate than large cities that experience decline [source: Sprawl City].

Next, we'll discuss how ordinary citizens can take action against sprawl.