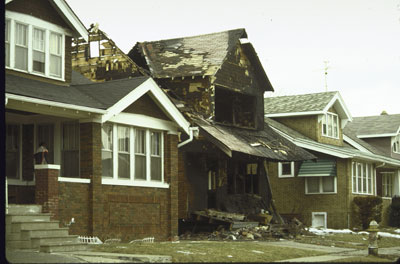 One reason for urban sprawl? People moving away from inner cities, where more crime usually takes place. This Detroit crack house was burned down by neighbors in an act of vigilante justice.
Photo by Andrew Sacks//Time Life Pictures/Getty Images

Those opposed to urban sprawl advocate controlling the problem by building high-density urban areas -- in other words, accommodating more people per square mile in buildings that grow up, (such as high-rise apartments) rather than out (such as subdivisions with 200 or more homes). This would spare the outlying rural areas from what's often deemed unnecessary development.

Unfortunately, this type of planning doesn't take into account lifestyle preferences. Many people simply don't like the crowds, traffic and confined living quarters that typically characterize urban living. They eschew these problems for split-level homes on an acre of land in the suburbs. However, self-professed city-dwellers enjoy the vast cultural and entertainment opportunities available in many large urban areas, as well as shorter commute times that can be ventured on foot or via public transportation.

Most experts agree that sprawl is exacerbated by a couple of factors: population growth and poor land use. Population growth tends to make people feel more crowded in cities, causing them to head for the hills. Poor land use occurs when people increase the average amount of land they use (also called per capita sprawl), such as when they trade in a 1,400-square-foot apartment for a 3,000 square foot home on an acre or two of land.

Population growth is considered a major factor in sprawl, although some urban areas continue to grow outward despite a decline in population. Figures released by the Census Bureau in 2007 announced that both legal and illegal immigration stand to increase population in the United States by 105 million by the year 2060 if current rates continue. Add that to the normal birth rate, and the current U.S. population of 301 million could become 468 million, making the sprawl issue even more pressing [source: SignOnSanDiego]. After all, where will all these people go? In an interesting twist, the census figures revealed that 40 percent of immigrants are bypassing cities in favor of suburbs, where many jobs are now located [source: The New York Times].

As we've learned, sprawl is most prevalent in the United States, although it can be seen around the world. Typically, sprawl is happening around most of the big cities. What's influencing the trend? For one, the southeastern United States tends to be the sprawl capital of the country, thanks in large part to its availability of affordable housing. A survey conducted by USA Today found that four of the top five most sprawling cities are located in the Southeast (Atlanta; Nashville, Tenn.; Charlotte, N.C.; and Greensboro, N.C.). Austin, Texas, was the only non-southeastern city to crack the top five [source: USA Today].

Also playing a major role is the fact that the Southeast, unlike desert areas such as Las Vegas, has easier access to municipal water supplies, making it that much easier to set up shop in the suburbs. What's more, the Southeast doesn't have to contend with the geographical factors present in other parts of the country and world, such as mountains and desert. Geographical barriers limit the amount of sprawling one city can do.

Another contributing factor to sprawl is white flight, which occurs when people abandon cities in an effort to be surrounded by others of similar race and socioeconomic background. Cultural segregation has been particularly prominent in cities in the midwestern and northeastern United States, including Grand Rapids, Mich.; Indianapolis and Cincinnati [source: USA Today]. Critics see this phenomenon as a serious civil rights issue that pushes already financially strapped inner cities further down a vortex of crime and poverty.

Next, we'll learn more about the various pros and cons of urban sprawl.

Urban area: An area with a large enough population (typically 2,500 people or more) to constitute a city or town. The U.S. Census Bureau classifies a large urban area as having 1,000 or more people per square mile [source: NASA].

Suburb: Heavily residential area located on the outskirts of a city that features many single-family homes

Rural areas: Area outside a city or town with fewer than 2,500 residents; also known as the country. Nonurban areas typically have ten or fewer people per square mile [source: NASA].