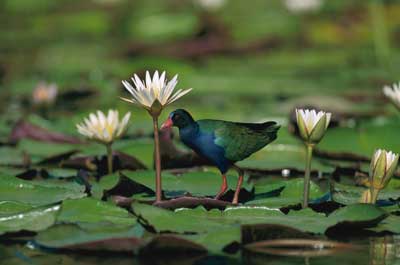 At one time, people believed wetlands were useless, and they were drained for development. But we now realize that wetlands are a valuable and crucial part of the world's ecosystem. Let's talk about some of the many benefits wetlands provide.

When you're doing the dishes or washing your car, you probably use a sponge to soak up the water. Think of wetlands as a giant sponge, slowly absorbing water and releasing it when necessary. The sponge-like quality of wetlands allows them to return water to the ground during dry periods. Wetlands also slow down water's momentum as it travels to the ocean or the river, and less momentum means less soil erosion.

Because wetlands slow the flow of water down, they're also able to filtrate the water. Wi­thout that momentum, the water travels around plants and vegetation more slowly. As a result, any suspended sediment drops out of the flow. This natural cleansing helps to keep pollution, toxins and nutrients out of the water system. Water overloaded with nutrients is susceptible to algae bloom, which can be very destructive to plant and animal life [source: EPA].

Wetlands are comparable to rainforests in the amount of species they can support (it's no wonder they attract nature photographers and wildlife enthusiasts). The abundant vegetation and shallow water levels in wetlands play host to many plant and animal species. What types of animals thrive in a wetland depends on the type of wetland, but can include muskrats, beavers, moose, raccoons, bobcats, swamp rabbits, and white-tailed deer. Wetland birds include bald eagles, ospreys, hawks, egrets, herons and kingfishers [source: CTIC]. Some of the more familiar fish and shellfish that depend on wetlands for survival include flounder, sea trout, striped bass, shrimp, oysters, clams, and blue and Dungeness crabs. And many species of birds rely on wetlands for breeding or nesting grounds, including ducks, geese, woodpeckers, hawks and wading birds [source: EPA].

Wetlands aren't just lovely to look at. They also protect us against floods. Like your car's brakes, wetlands halt the velocity of floodwaters and help to disperse the excess water. Undisturbed wetlands can store up to 60 days of floodwater [source: EPA]. When coastal wetlands are lost, it leads to weakened storm buffers. Wetlands can also act as a buffer against colder temperatures. As farmland has replaced wetlands, crops have become more susceptible to frost -- even in south Florida [source: O'Connor].

What are the different types of wetlands and how do they form? Find out on the next page.

Is Jimmy Hoffa buried in the wetlands?

Jimmy Hoffa, a 1930s labor organizer, eventually rose to president of the Teamsters Union, the largest union in the United States. But Hoffa also had his share of legal troubles and mob connections, and he eventually spent several years in jail for jury tampering. Hoffa disappeared from the face of the earth on July 30, 1975. The last time anyone ever saw him was in a restaurant parking lot. Police believe he was murdered, but authorities never found a body [source: Brittanica].

Urban legend has it that Hoffa's body lies somewhere in the Meadowlands, a sports­ complex built among the swamps of New Jersey. Some stories say his body was dumped into the wetlands, decomposing in the murky and polluted water. Other stories say he was buried in the concrete of Giants Stadium, also located in the Meadowlands. The television show Mythbusters dedicated an episode to searching for his body.