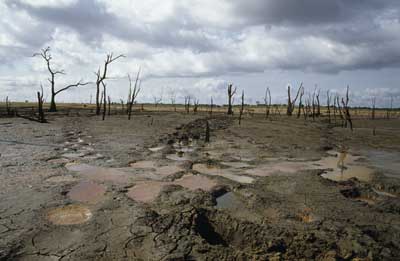 A drought-stricken wetland in Sri Lanka, with elephant tracks through the mud.
Jason Edwards/National Geographic/Getty Images

The United States has lost more than half of its original wetlands due to drainage, conversion to farmland or other forms of development. The highest rates of wetland loss occurred between the 1950s and the 1970s, until conservation movements considerably slowed the rate of decline [source: EPA]. But wetlands are still under threat.

Human activity is probably the most prevalent cause of wetland destruction or degradation. Development -- whether it's drainage, damming to form lakes or ponds, adding pavement, or diverting water flow -- affects the soil's hydrologic condition, or the presence of water in the soil [source: Merriam-Webster]. If there's no water, there's no wetland.

Humans can't take all the blame, though. There also are natural threats to wetlands, such as droughts. Even though wetlands are sponge-like and can hold water in reserve for a long time, they can't do it forever. Some wetlands will eventually dry out if they aren't replenished. Wildlife can also be a detriment. Overgrazing by animals can cut down on the area's vegetation, leaving wetlands susceptible to erosion. Natural disasters like hurricanes or flooding can greatly erode a wetland area. While wetlands act as a buffer against these weather occurrences, they also pay the price with diminished vegetation and pollution from runoff.

Pollution als­o degrades wetlands and water quality. Again, wetlands act as a natural filter for polluted water, but they can only absorb so much. Pollution enters the water table through pesticides, sediment, sewage, fertilizers and many other forms. Once a wetland is polluted, it's difficult to clean it up. The best way to keep wetlands clean is to protect them from pollution in the first place, by ensuring a contaminant-free water supply.

Global warming is also a threat to wetlands. A study by the Pew Center on Global Climate Change found that as air temperatures rise, so do water temperatures. Because warmer waters are more productive, wetlands may end up overrun by algae, which degrades water quality and poses health problems­ to humans and animals. The algae bloom known as red tide releases toxins, which have killed thousands of fish. Eating affected shellfish can expose humans to these toxins. Breathing the air near a red tide can also cause respiratory issues in some people [source: CDC]. Also, many fish rely on cooler water to survive and can die out when smaller lakes or ponds warm up. Elevated temperatures also lead to reduced precipitation, which reduces the amount of runoff provided to wetlands [source: Pew Center].

So what can be done to save the wetlands? Keep reading to learn what the U.S. Clean Water Act and other private organizations are doing to protect wetlands.

Wetlands don't just nourish wildlife, they nourish storytellers' imaginations. For example, in the state of New Jersey, the "Jersey Devil" legend frightens children with its description of a creature born with a tail, hooves and wings that lives in the wetlands by day and destroys crops and livestock by night [source: State of NJ].

Wetlands also serve as excellent backdrops for creepy movies and books. For example, in the comic book "Swamp Thing," which was eventually turned into a movie, a man who was murdered and dumped in a swamp rises from the dead as a "muck monster" seeking vengeance [source: Markstein].