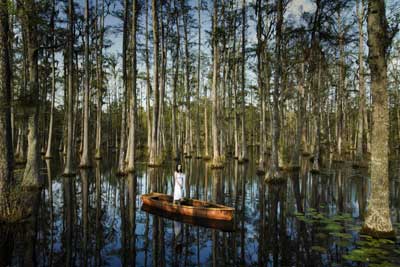 Cypress trees are common to wetlands, like these in a Charleston, S.C. swamp.
Eric Keil/Aurora/Getty Images

Wetlands can form naturally or through animal or human activity. Common causes of natural wetlands include:

In addition­, wetlands ­might form when beavers dam a river or stream. The diversion of w­ater causes flooding and, as a result, wetlands develop. U.S. state agencies also may intentionally flood dry areas to encourage wetland formation to host wetland-dependent species.

There are actually several types of wetlands. The U.S. Environmental Protection Agency (EPA) categorizes wetlands into marshes, swamps, bogs and fens. Though they have differences, they all serve the environment by acting as a buffer against flooding, absorbing excess nutrients, and providing habitats for a wide variety of species. Let's take a closer look at ­each type­.

A marsh is a wetland frequently or continually filled with water. Marshes can be found on the coast and inland, and can be either freshwater or saltwater. Characterized by grassy, soft vegetation that grows in the soggy soil conditions, marshes can be one of two types -- tidal or non-tidal. Found along coastlines, tidal marshes are most prevalent on the eastern coast of the United States and in the Gulf of Mexico. Non-tidal marshes are the most common type of wetlands in North America and occur along the boundaries of streams, rivers, ponds and lakes. Water is generally only a few inches or feet deep with soil that's extremely mineral-rich and organic. Non-tidal marshes host vegetation like lily pads, cattails, and reeds as well as a varied sample of animal life, including muskrats, otters, blue herons and blackbirds.

A swamp is any wetland dominated by woody plants and several feet of water. The Everglades in Florida is one example of a swamp. As with most wetlands, swamps function as flood protection and nutrient removal. The saturated ground and standing water form a black,­ thick and nutritious soil, providing a favorable environment for water-tolerant shrubs and trees. Fittingly, then, there are two types of swamps -- shrub swamps and forested swamps­. The difference between the two swamps simply is the type of vegetation present. You will often find shr­ub swamps and forest swamps adjacent to each other. Shrub swamps are swamps filled with lower, bushy vegetation such as willow, dogwood, swamp rose and mangroves. Forested swamps host trees like red maple, pin oak, tupelo, cypress and willows. They play a vital role in the survival of wetland-dependent animals, like ducks, snakes and otters.

Bogs receive most of their water from precipitation, rather than runoff or floodwaters. Their spongy, mossy floors contain fewer nutrients than a marsh or swamp. As the moss decomposes, it forms acidic peat. Acidic peat will burn for a very long time, and people harvest it for fuel. This peat is also very low in nutrients, and only specially adapted creatures may call a bog home, like salamanders, dragonflies, snakes and carnivorous plants. Found mostly in the northeast U.S. and Great Lakes regions, bogs are also an excellent area to grow cranberries.

A fen is similar to a bog, except that a fen receives its water from the ground­ rather than from precipitation. The water that feeds a fen is actually water from melted glaciers. As the glacier melts, it deposits sand and gravel into the soil, preventing its runoff from permeating into the soil. Instead, it flows sideways and picks up minerals and sediment as it travels. This means a fen's ­water is much more rich and nutritious than a bog. Therefore, fens host a diverse community of plants and animals. Wildflowers, deer, turtles, butterflies and even fish may find a home in a fen. Fens are rare, found primarily in the northern hemisphere in areas with low temperatures. It can take up to 10,000 years for a fen to form naturally [sources: EPA and U.S. Fish & Wildlife Service].

In the next section, we'll examine the threats to wetlands. How quickly are wetlands disappearing?