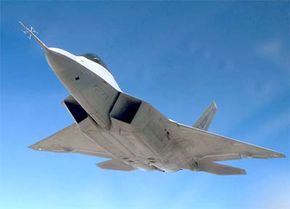 The first jet fighters appeared at the end of World War II. A few of them, equipped with machine guns, saw combat and quickly proved that jets were here to stay. During the Korean War, faster, more heavily armed fighters entered service, including the first supersonic air-to-air dog fighters and the first to carry only missiles as weapons.

Today, powerful fighter aircraft are basically flying computers that combine technology and stealth design to be invisible to enemy radar and attack their opponents without warning. We'll look at the newest fighter in the U.S. Air Force's aerial arsenal, the F/A-22 Raptor. The "F/A" designates the Raptor as a "fighter" and an "attack" aircraft. As we'll see, the F/A-22 incorporates the latest approaches to avoiding detection along with a mind-boggling array of weapons and technology to succeed at both missions. 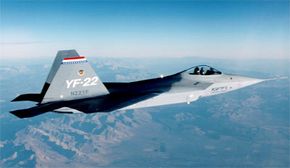 The F/A-22 is the world's first stealth air-to-air fighter, designed to be unseen at long range and deadly in close-in air combat. It can also strike ground targets with precision accuracy. Its design gives pilots unmatched maneuverability in the air.

­The F/A-22 was originally designed to replace the F-15 Eagle. Because of the Eagle's versatility, the rising cost of developing the F/A-22 and the changing world scene, the Raptor now supplements the F-15 instead of replacing it. When the F/A-22 program began in the early 1980s, the Air Force wanted a fighter to counter the threat from the Soviet Union. Since the end of the Cold War, the need for an air-superiority fighter has fallen: Pentagon war planners expect future conflicts to be fought against enemies with small air forces or none at all.

Three of America's largest defense contractors -- Lockheed Martin, Boeing and Pratt & Whitney -- joined together to develop and produce the F/A-22.

In the following sections, we'll learn more about the technology that makes the F/A-22 the best fighter in the skies. 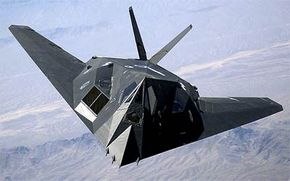 Once the stuff of sci-fi speculation and rumors, stealth capability came into the limelight with the F-117 Nighthawk and the B-2 Stealth Bomber.

Radar works by sending radio waves out from an antenna and collecting the waves that bounce back from any objects (see How Radar Works). On a radar screen in an aircraft or in a ground-based radar station, an airplane appears as a blip. The larger the aircraft, the larger the blip appears on the screen. Other objects, such as flocks of birds, can also show up. Aircraft designers have worked for years to minimize the radar signature of an aircraft. If the radio waves are deflected or absorbed so they don't return to the radar antenna, then the airplane is invisible or could be mistaken for a flock of birds or other non-threatening object.

Aircraft designers use irregular sawtooth edges, a jumble of curved surfaces and other design tricks to deflect radar waves in unexpected patterns. Planes are painted with thick paint that can absorb radar waves instead of reflect them. The idea is to make the aircraft appear to disappear into thin air. 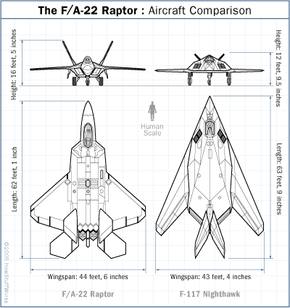 The F/A-22 incorporates all the lessons learned from previous aircraft. It is so stealthy that it appears to be the size of a bumblebee when detected by radar, even though it is more than 62 feet long and has a wingspan of 44.5 feet.

The angular shape of the F/A-22 is similar to the F-117 Stealth Fighter. Many of the surface shapes are curves with changing radii. These curves scatter radar beams in all directions instead of back to the radar source. There are no right angles on the exterior of the design. Sawtooth edges on cockpit edges, landing gear doors and other openings also break up radar. The edges of the main wing and rear wing line up exactly, making them appear much smaller on radar.

The F/A-22 has two large vertical fins, much like the F-15. On this aircraft, the straight-up fins contribute to a high visibility on radar. On the F/A-22, however, the vertical fins are angled like the body to deflect radar. The fins also conceal internal antennas that help maintain the invisibility of the aircraft.

The F-22's topcoat absorbs radar waves, too, and the cockpit was designed to minimize the radar profile of the pilot's helmet.

Tracking the heat from jet engines is another common way to identify airplanes. Heat-seeking missiles track the infrared emissions from an airplane's engines to find their target. Blocking infrared emissions can fool a heat seeker. In the F/A-22, the horizontal fins at the rear of the aircraft not only make the plane more maneuverable, but they also act as a shield for the engine exhaust heat. Shielding the heat of the engines keeps the thermal or infrared signature of the F/A-22 at a minimum.

Unlike current fighters, the F/A-22 can carry missiles inside the fuselage. The F-15 and F-16, for example, can only carry missiles under the wings, where they can reflect radar waves and make the plane much more visible.

The idea behind all this technology is to reduce the enemy's ability to find, track and target the F/A-22. Pilots can fly into defended areas that would otherwise be inaccessible to American fighters.

Keep reading to find out about the engine that gives the Raptor capabilities never before seen in a fighter jet. 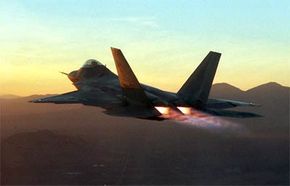 The Raptor's two Pratt & Whitney F119-PW-100 engines pump out 35,000 pounds of thrust each (compare that to the 25,000-29,000 pounds of thrust for each engine on an F-15). Combined with the sleek aerodynamic design, the engines allow the Raptor to cruise at supersonic speeds with less fuel consumption than any other aircraft. That means the Raptor can fly faster for longer periods of time, reaching far-off targets faster than other jets. It can stay in an area looking for enemy targets longer or carry a bigger bomb load because it does not have to carry as much fuel. 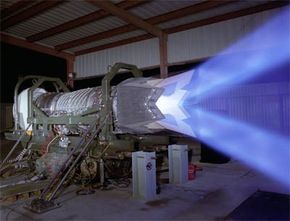 At the rear of a jet engine, a nozzle directs the flow of hot exhaust gases out of the engine and afterburner. Usually, the nozzle points straight out of the engine. The F/A-22's nozzle, on the other hand, is the first vectoring nozzle. That means the pilot can move, or vector, the nozzle up and down by 20 degrees.

The gases coming out of the vector nozzle help push the airplane's nose up or down. This vectoring increases the roll rate of the plane by 50 percent, making it much more maneuverable than other fighters.

Thrust vectoring is built into the flight control system, so it works automatically in response to commands from the pilot. When the pilot turns the aircraft, the nozzle moves in the desired direction along with the elevator, rudder and aileron control surfaces. The latter three surfaces are common to all airplanes:

With the vector nozzle, the F/A-22 has a fourth type of control surface.

The F119 engines also give the F/A-22 a high thrust-to-weight ratio. That means the engines can actually handle many times the airplane's weight, allowing the plane to accelerate and maneuver very quickly.

Next, we'll talk about the amazing electronics that make the F/A-22 seem like a flying video game.

Flying Video Game: Behind the Scenes 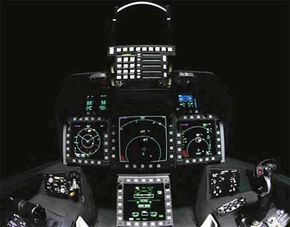 A modern fighter pilot relies on electronics and instruments to fly and to find and fight the enemy. Traditionally, those two systems have been separate in the cockpit, forcing the pilot to manage all the information separately.

The F/A-22's system was designed to let one crewperson handle the workload found in two-seat aircraft such as the F-14 Tomcat and the F-15 Strike Eagle. Its avionics systems are the first to integrate radar, weapons management and electronic warfare systems into the overall flight system.

Behind the scenes are two common integrated processor (CIP) units, the brains of the system. The size of a large breadbox, these units process all information for sensors and weapons. Currently, only 75 percent of the CIP's capacity is used, so it can easily take on more duties as computing requirements in the cockpit grow. There is space for a third CIP to be installed, allowing for 200 percent growth in capability overall.

The cockpit is designed to help the pilot use the information at hand to make decisions quickly in the heat of battle.

Flying Video Game: In the Cockpit 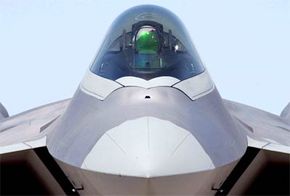 In the F/A-22 computer screens display all information -- it's the first so-called "all-glass cockpit" in a tactical fighter. These digital displays have been common in commercial aircraft for years.

The cockpit is fitted with a hands-on throttle and stick control (HOTAS). This system allows the pilot to fly the plane without removing his or her hands from the flight controls. The F/A-22 also has the first cockpit system compatible with night vision goggles (NVG). A heads-up display (HUD) projects information in front of the pilot's view, showing target status, weapon status and cues that indicate if the weapons are locked on the target. The pilot inputs information for communications, autopilot and navigation in the integrated control panel (ICP) in the center top of the instrument panel.

The goal is to make it simple for the pilot to process all the information being displayed. The pilot can tell at a glance what the situation is: Enemy aircraft show up as red triangles; friendly aircraft are green circles; unknown aircraft are yellow squares; surface-to-air missiles are pentagons. To show that a pilot has a lock on the target, the red triangle becomes solid. The system is 98 percent accurate in determining the type of aircraft flying in range. If the system can't make identification, then the aircraft is shown as an unknown.

With all that technology onboard, the F/A-22s can create a wireless data link to share tactical information without talking about it on the radio. A pilot can know how much fuel and how many weapons a wingman is carrying while maintaining radio silence. Multiple flights of planes can link up to coordinate attacks because each plane can see which targets others have identified. The F/A-22 can also communicate with Airborne Warning & Control System (AWACS) aircraft and receive downloads from reconnaissance planes. 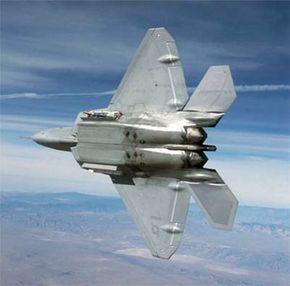 The radar system gives the F/A-22 first-look, first-shot, first-kill capability. That means it can see an enemy plane first, fire a missile and destroy the target without the other pilot ever knowing about it.

The AN/APG-77 radar was developed specifically for the F/A-22. It uses an active, electronically scanned antenna array of 2,000 transmitter/receiver modules. The radar provides pilots with detailed information about multiple threats before the adversary's radar ever detects the F/A-22.

Also, the radar can jam enemy electronics systems and communicate voice and data information over a secure link.

To detect enemy activity, the F/A-22 carries a radar warning receiver and a missile-launch detector. If an enemy locks on with a heat-seeking or radar-guided missile, the F/A-22 can launch countermeasures. It releases flares to confuse heat seekers and sends out chaff, small pieces of reflective material, to disperse radar waves and confuse a radar-guided missile's tracking system. 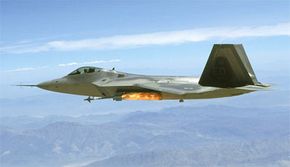 All of this technology serves one purpose: to deliver the F/A-22's weapons to the target.

Like other stealth aircraft, the F/A-22 can carry weapons inside the fuselage. The main weapons bay can carry six radar-guided AIM-120C medium-range air-to-air missiles. If the mission includes ground attack, two 1,000-pound GBU-32 Joint Direct Attack Munitions replace four of the AIM-120Cs. Two small bays on each side of the aircraft hold two heat-seeking AIM-9 Sidewinder short-range air-to-air missiles. Hidden behind a stealth door above the right air intake is the M61A2 20-mm multibarrel cannon. It holds 480 rounds of 20-mm ammunition and feeds the gun at a rate of 100 rounds per second.

When stealth is not a requirement, the F/A-22 can carry weapons and fuel tanks under the wings.

Langley Air Force Base in Hampton, VA, was the first to operate the Raptor in late 2004. It is scheduled to remain in service through 2040.

For much more information on the F/A-22 and other military aircraft, check out the links on the next page.