Game Theory and the Cold War 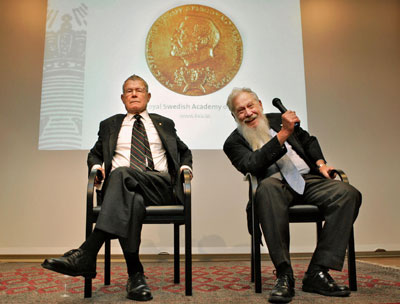 Game theory's development accelerated at a record pace during World War II. Though it was intended for economics, both the United States and the Soviet Union quickly saw its value for forming war strategies.

Early in the Cold War, the Eisenhower administration viewed nuclear weapons like any other weapon in the arsenal available for use [source: Spence]. Game theorist Thomas Schelling convinced officials that nuclear weapons were only useful as deterrents. Additionally, he proposed that the U.S. should have a variety of responses it could call upon in relation to the size of the offense against it.

A balance was struck in which neither nation could gain advantage through nuclear attack -- the reprisals would be too devastating. This was known as Mutual Assured Destruction (MAD). This balance required open acknowledgment of each nation's strengths and vulnerabilities. However, as prisoner's dilemma showed us, both players must assume the other is only concerned with self-interest; therefore, each must limit risk by adopting a dominant strategy.

If one nation changed the balance of power (by building a missile-defense shield, for instance), would it lead to a strategic blunder that resulted in nuclear war? Governments consulted game theorists to prevent such imbalances. When one nation built missile silos, the other nation targeted them. The Soviet Union and the U.S. then spread out and hid their launch sites around the globe, which required both nations to commit more missiles to a potential first strike in order to diminish the retaliatory abilities of the other. They also kept nuclear-armed aircraft aloft in the skies at all times to provide a deterrent if the silos were destroyed. As another deterrent, they established nuclear-armed submarines. This pretty much covered all bases: ground, air and sea.

The atmosphere was tense, and there was a constant threat of miscommunication leading to disastrous results. In the midst of such massive distrust, even a defensive move (such as building fallout shelters) could be interpreted as provocative. Building fallout shelters, for instance, makes it look like you're expecting trouble. Why are you expecting trouble, unless you're planning on starting it?

By no rational or mathematic measure would it make sense to launch nuclear weapons after your nation has already taken a significant hit. What would be the point? World destruction for the sake of revenge? But if revenge isn't a deterrent, what keeps either nation from launching a first strike? To counteract the threat of a first strike, American and Soviet leaders sometimes used a "madman strategy" or released rumors that they were mentally unstable or blind with rage to keep the other off guard.

Weapons control and disarmament negotiations were essentially repeated games that allowed both parties to reward cooperation and punish defection. Through repeated meetings and increased communication, trust and cooperation led to (some) disarmament and less strategic posturing. This was also due in no small part to the resources required to maintain an ever-growing nuclear capability.

Fortunately, neither nation was willing to play the final stage of a game in which the best possible outcome involved a victory that could only be celebrated by a handful of survivors underground.

So aside from Cold War strategies, how else can game theory be useful? Find out next.

Secretary of State Henry Kissinger studied game theory as a young man at Harvard and participated in many think tanks with forming Cold War strategies. While in office, he attended game theory conferences and sought advice from leading game theorists, such as Thomas Schelling.