Other Games and Applications 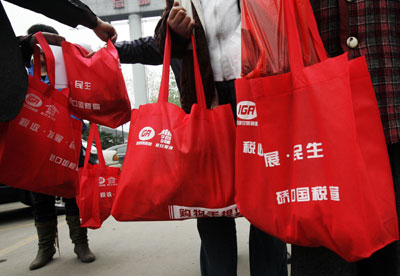 Chinese shoppers carry reusable bags because the government has announced a nationwide ban on free plastic bags in an effort to reduce crude oil consumption. Environmental initiatives are one example of a real-life public goods game.
China Photos/Getty Images

Game theory is also useful for sociological studies. There are different games or scenarios that theorists use to analyze behavior patterns. One of these is the ultimatum game.

In the ultimatum game (a one-shot game), two players start off with nothing. Player 1 is given $10 and is instructed to give a portion of it to Player 2, who can accept or reject the offer. If Player 2 accepts Player 1's offer, both players walk away with something. But if Player 2 rejects the offer, then neither profits.

Theorists initially believed that Player 1 would offer grossly uneven splits (like only $2 out of the $10, for example) and Player 2 would accept, since it was better than nothing. This supported early economic models that suggested a player always acts out of self-interest. So, if Player 1 offered just $1, Player 2 would accept. After all, something is better than nothing. However, studies have shown that even in one-shot scenarios, Player 2 will sometimes reject the offer. It could be interpreted that Player 2 is simply insulted by such a low-ball offer because it's unfair. But is it really?

When accepting $2, the gain can be either viewed as net or as relative. So, from one point of view, $2 is better than nothing every time. However, if your net gain is two dollars, you have advanced from a point of having equal value to your opponent (nothing) to a point of a great relative disadvantage, in that your opponent in the course of one move now has $6 more than you do. Depending on the situation, it may be advantageous to reject any offer that is not evenly split.

What good is this? Well, by studying how players act within this game, we may learn what truly motivates people. Economic theory maintains that making as much money as possible is the most important thing. We know, however, that life is about more than just that one pursuit. But money is important to survival, and our use of it reflects other values. Study participants belonging to cultures that value gift-giving are more likely to make offers that favor the recipient. Other cultures may decline a favorable offer because acceptance would bring with it an obligation to the gift-giver [source: Henrich].

In another application of game theory called evolutionary theory, each player is viewed as a strategy him or herself. That is, you represent the result of your ancestors' decisions. If your ancestors chose to steal from their neighbors, you're the walking embodiment of that survival strategy. As these strategies compete for dominance, certain strategies will dominate and replicate, in the form of children. Eventually, these will dominate other strategies by sheer numbers.

A scenario called public goods tests players' rationality. In this game, a group of six players is given $10 each. They are then told that any money contributed to a general pool will be tripled and divided evenly among all players, regardless of how many contribute or how much. The rational course of action is to defect -- not to contribute -- and benefit from whatever dividend may come your way. Fortunately for us, in real-life situations, people sometimes deviate from the rational course and contribute to the pot. One real-life example of the public goods game is the environment. Whether or not an individual invests money or effort into environmental stewardship, that individual will benefit from any contribution made by others.

Is game theory just an excuse to look out for No.1? Continue reading to find out.