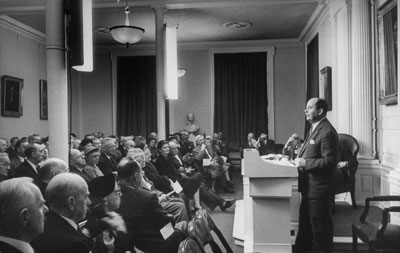 John von Neumann and Oskar Morgenstern introduced game theory to the world in 1943 with "Theory of Games and Economic Behavior." They hoped to find mathematical answers to economic problems.

According to economic theory, producers could make a greater profit by reacting to conditions such as supply and demand. But these theories fail to account for the strategies of other producers, and how the anticipation of those strategies affects each producer's moves. Game theory attempted to account for all of these strategic interactions. It didn't take long for military strategists to see the value in this.

When we discuss game theory, we assume a few things:

In the next section, we'll put this information to use and see what we can learn about strategy by plotting it on a game tree.

Game theory in the bathroom?

Mathematician John Nash -- winner of the 1994 Nobel Prize in economics and namesake of the Nash Equilibrium -- invented a game in 1948 that became known as "Nash" or "John." It was often played on the hexagonal floor tiles in the bathrooms of Fine Hall, home to Princeton's mathematics department.

Nash was a two-person game in which players took turns placing pieces on open spaces of a diamond-shaped board formed of hexagons. The winner was the first to form an unbroken chain connecting his two sides of the board. This game was independently invented by a mathematician in Denmark and was known as "Polygon." In 1952, Parker Brothers commercialized the game and marketed it as "Hex" [source: Weisstein].