Overview of the Project Gemini 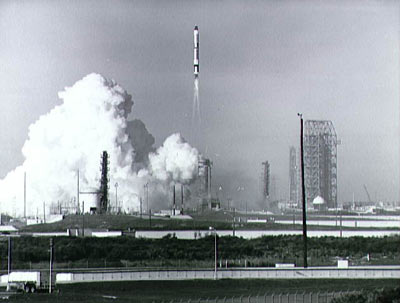 The Gemini Project included 12 flights, two of which were unmanned. NASA intended these flights to test the effects of prolonged space travel on humans. Spacewalks became an important part of several Gemini missions, so NASA devoted a lot of time and effort into improving the design of space suits. Earlier versions of the suits were meant as emergency backup systems only. As such, they weren't very flexible or comfortable.

All the astronauts in the Gemini program returned to Earth safely. The Gemini missions included:

What was the launch vehicle for the Gemini Project like? Find out on the next page.

Fuel weighs a lot. NASA faced a tough problem with Project Apollo: If the entire trip to the moon's surface and back used a single spacecraft, it would have to carry a lot of fuel. That meant that the vehicle (a rocket) used to launch the Apollo spacecraft into orbit would need to be very powerful. At the time, NASA engineers determined that the power requirements to launch such a heavy vehicle were too great for any of the rockets they had. Their solution was to create spacecraft that could dock with other vehicles. At first, the engineers considered launching an unmanned container filled with fuel with which a spacecraft could dock while in orbit. Later, NASA decided to divide the Apollo spacecraft into modules, including a lunar module (LM) that could carry its own fuel. That way the command and service module (CSM) would only need to carry the fuel necessary to return to Earth. One of the mission objectives for Project Gemini was to test the possibility of docking a spacecraft with another structure to make sure this plan for Apollo was a good idea.