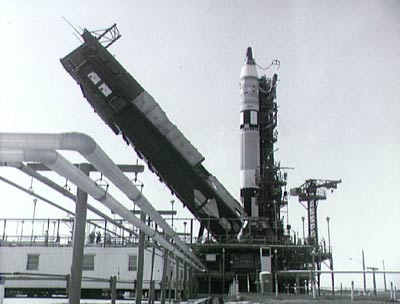 During Project Mercury, NASA relied on two different launch vehicles: a Redstone launch vehicle for suborbital flights and an Atlas vehicle for orbital ones. Because the Gemini capsule was larger and heavier than the Mercury capsule, NASA had to find a more powerful launch vehicle.

After considering several candidates, NASA decided to use a modified intercontinental ballistic missile (ICBM) made by Martin Marietta (we know the company as Lockheed Martin today). It was called the Titan II ICBM.

The Titan II and Gemini capsule together stood 108 feet tall (33 meters). The Titan II used a mixture of hydrazine and Aerozine-50 as fuel. For an oxidizer (an agent that allows fuel to burn), it used nitrogen tetroxide. The oxidizer and hydrazine are hypergolic agents, which means that when you mix the two together, they ignite.

Just before launch, NASA would combine the fuel and oxidizer in the first stage of the Titan II launch vehicle. Upon mixing, the fuel ignited and the vehicle and Gemini capsule rocketed into the atmosphere. After about two and a half minutes, the Titan 2-1 would shut down, having consumed its fuel. At that time, the Titan 2-2 engine would fire and the first stage would separate from the rest of the vehicle and plunge into the ocean. Once in orbit, the Gemini capsule jettisoned the second stage.

NASA modified the Titan II extensively to act as a launch vehicle. Engineers added a malfunction detection system that would warn the crew if something went wrong before or during a launch. They also reinforced the rocket's electrical and hydraulic systems, providing backups in case the primary systems failed. Other modifications included adding monitoring devices so that NASA could track the flight of the rocket during launch.

While the Titan II wasn't designed to return to Earth, it remained useful even after it used up all its fuel. That's because the astronauts practiced flying in formation with the spent Titan 2-2 stage, giving them valuable experience with piloting the Gemini capsule in space.

So what made the Gemini capsule tick? Keep reading to find out.

If you watch videos of the Gemini launches, you'll notice that the rocket produces an orange vapor as it ignites. That's because NASA used nitrogen tetroxide as the oxidizer. Nitrogen tetroxide is clear at cooler temperatures, but once it warms to 59 degrees Fahrenheit (15 degrees Celsius), it turns orange. When it comes in contact with the air, it gives off orange fumes. While it's interesting to look at, you wouldn't want to get any on you. Nitrogen tetroxide is caustic, which means it can cause chemical burns.