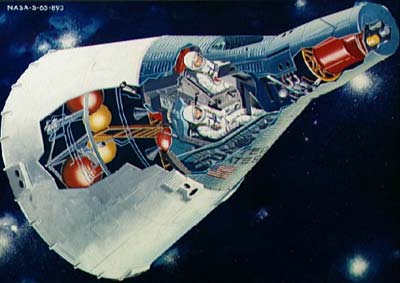 An artist's concept of the Gemini spacecraft.
Image courtesy NASA

The Mercury capsule could hold only one astronaut, so NASA had to design a larger spacecraft in order to send a two-man crew up into space. It based much of the capsules design off the Mercury spacecraft, but didn't double the size. Instead, NASA engineers increased the interior space by about 50 percent. That made things a little cramped for the astronauts sitting inside. What's more, the astronauts couldn't get up and move around in the capsule -- they were confined to their seats.

The only exception to this situation was when an astronaut went on a spacewalk. At that time, both astronauts pressurized their space suits. One would open the hatch above his chair to exit the vehicle (unlike the Mercury capsule, the Gemini spacecraft had two hatches). Once outside the capsule, he could stretch his legs while his crewmate stayed inside the vessel to pilot the ship.

NASA had to do more than just make a larger version of the Mercury capsule. The Mercury's maneuverability in space was extremely limited, while the Gemini would need to be able to dock with another vehicle. To that end, engineers built and installed a retrograde section containing eight thrusters (small rocket engines). This section attached to the bottom of the Gemini capsule. Besides housing the thrusters, this section also contained a tank of drinking water, an oxygen tank, a coolant pump system, fuel tanks, an electrical power system and a communications system. The retrograde section remained with the Gemini spacecraft until re-entry, whereupon the spacecraft jettisoned the section into space.

Before Gemini V, the Gemini spacecraft used batteries to supply electrical power. Gemini V was the first spacecraft to use fuel cells to generate power. Fuel cells use hydrogen and oxygen to generate electricity. One of the benefits of the fuel cell system is that the byproduct of generating electricity is water. Later, on the Apollo spacecraft, NASA would create a system that could reclaim water generated by the fuel cells and use it as drinking water.

A fish-eye view of the interior of the Gemini capsule.
Image courtesy NASA

Inside the capsule, the astronauts' view consisted of two windows and several displays and control panels. The spacecraft's computer analyzed data gathered from various sensors and calculated the correct trajectory and power needed to achieve mission goals. The capsule also contained the spacecraft's radar system, re-entry and attitude control system and a parachute landing system. While the astronauts could pilot the Gemini spacecraft while in orbit, the computer system controlled many of the maneuvers by sending commands directly to the appropriate systems.

NASA designed the Gemini capsule to dock with other structures while in space. What did they use as a docking vessel? Keep reading to find out.

Unlike the Mercury and Apollo spacecraft, the Gemini spacecraft didn't have a launch escape system (LES). Instead, the capsules seats were ejection seats. In case of an emergency during launch, the astronauts could eject out of the capsule. First, the hatches would open, and then a rocket under the seat would catapult both astronauts away from the capsule. At that time, the ejection seat would deploy a parachute. The system was designed in the event of a launch emergency or an emergency when gliding back on re-entry (NASA later dismissed the glider concept).