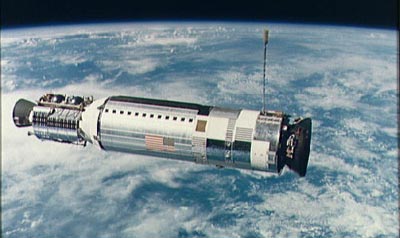 In order to practice docking maneuvers in space, NASA needed to provide a structure with which the Gemini capsule could dock. The solution was a modified Agena second rocket stage. Normally, the Agena would act as part of a launch vehicle for a spacecraft. NASA modified it so that it could also become a docking vessel. Engineers designed a docking collar that fit on the top end of the rocket stage and modified the rocket engine so that it could restart after shutting down.

Using an Atlas rocket as the first stage, NASA launched the newly dubbed Gemini Agena Target Vehicle (GATV) into orbit. Using a radio-controlled computer system, NASA ground control could maneuver the Agena into the proper orbit and alignment to await docking from a Gemini capsule.

The GATV had a Model 8247 rocket engine mounted on a gimbal, which means it could tilt in different directions. By tilting the rocket engine, NASA could control in which direction the vessel moved. It used unsymmetrical dimethylhydrazine (UDMH) for fuel and inhibited red fuming nitric acid (IRFNA) as an oxidizer.

When docked with the Gemini capsule, the astronauts could use the GATV's engine to provide extra thrust and move into higher orbits. Together, the two vehicles could move all the way to the edge of the Van Allen Belt, a region of radiation within 4,000 miles of the Earth's surface [source: NASA].

The first spacecraft to dock successfully with a GATV was Gemini VIII in March 1966 -- for 30 minutes. In July 1966, the Gemini X docked with two different GATVs during its mission. The success meant that NASA met the Gemini Project's most important mission objective. It also meant that landing a man on the moon before the end of the decade was feasible. The Apollo mission could proceed as intended.

NASA originally intended the Gemini to land on solid ground, but later decided to land only in the water. What made them change their minds? Find out in the next section.

To protect the GATV's docking collar during launch, NASA included a nose shroud. This was a protective covering that fit over the end of the GATV. Once in orbit, the GATV was supposed to jettison the shroud. On the Gemini IX mission, the shroud didn't jettison properly, and the crew aboard the Gemini capsule had to cancel its docking maneuvers.