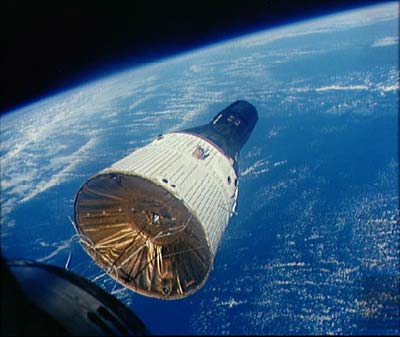 In this shot of the Gemini VI and VII rendezvous, the two spacecraft were 29 feet (9 meters) apart.
Image courtesy NASA

During the early planning stages of Project Gemini, NASA explored the possibility of designing the capsule so that it could touch down on land. The Mercury capsules could land safely only in water. In order to make it possible to touch down on land, NASA tried to design a spacecraft with fixed or retracting wings, to turn the spacecraft into a paraglider. While engineers made some progress toward this goal, the paraglider wings never deployed fast enough to be effective. NASA eventually scrapped the idea in 1964.

While initially disappointing, the switch to a water landing system was probably for the best. On early Gemini flights, astronauts manually controlled much of the spacecraft's maneuvers during re-entry. Despite their best efforts, they usually landed many miles away from their target landing zone. Even Gemini XI, which relied on the spacecraft's computer system for an automatic re-entry, landed 2.65 nautical miles (4.9 kilometers) away from the intended landing zone. While one stretch of water in the middle of the Pacific Ocean is much like another, it takes a great deal of precision to touch down safely on a specific section of land.

Just before re-entry, the Gemini capsule would jettison the retrograde section, leaving only the cone-shaped spacecraft holding the crew. In most cases, the astronauts used the capsule's controls to maneuver it so that the large, blunt end faced the Earth. This was where NASA installed the Gemini's heat shield.

The tip of the Gemini capsule contained a parachute system. Small explosives deployed the parachutes, which helped slow the capsule's descent. The capsule then would make a big splash in the ocean and float until a rescue ship could retrieve the vehicle and astronauts.

Gemini X splashes down into the ocean.
Image courtesy NASA

Cynics might say that NASA's main motive for the Gemini spacecraft was to keep space exploration in the public eye during the years between Project Mercury and Project Apollo. While that may have played a role, NASA also used Project Gemini to gather important information and prove that vehicles in space could dock together. Without this experience, it's doubtful that NASA could have succeeded in achieving Kennedy's vision.

To learn more about space exploration and other topics, blast off to the links below.

Put on the Brakes

It might sound strange, but the most important braking system for the Gemini spacecraft was the Earth's atmosphere. The friction generated from the spacecraft moving through the atmosphere at tremendous speeds produced intense heat. Without the heat shield on the base of the Gemini spacecraft, the astronauts inside the capsule wouldn't have been able to survive.