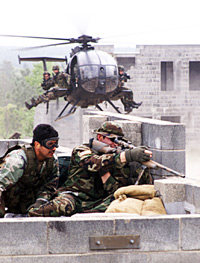 Green Berets are trained to fill a specific role within the smallest detachment structure, the Alpha Team (A-Team). Within this 12-man detachment, there are two leadership positions: the Commanding Officer and the second-in-command, the Warrant Officer.

Each position has a redundancy so that an A-Team can split into two sustainable groups if necessary.

Positions in an A-Team

Within the six A-Teams that form a single Special Forces company, one team receives special training in airborne insertion, and another team is trained in underwater insertion. Both of these tactics, along with ground infiltration, are used to get Green Berets quickly and quietly behind enemy lines.

All special forces groups, including the Green Berets, fall under the Special Operations Command (SOCOM). In 1986, the Department of Defense Reorganization Act gave the Special Forces more room to operate. This Act created the civilian position of the Assistant Secretary of Defense for Special Operations and Low-Intensity Conflict, a position that oversees special operations. By creating a position directly responsible for government oversight and approval of special operations, the United States government not only gave the Special Forces more agility at carrying out its missions, but also created more accountability as well.

The operations these highly skilled soldiers undertake can be lumped into three general groups: wartime operations, post-hostility/peacetime operations and humanitarian missions. The goals and parameters of an operation depend largely on the context in which the mission takes place. Operations may overlap and be similar: Direct action in wartime may have the goal of ending the war, while direct action in peacetime may aim to prevent a war from starting. In the next sections, we'll examine each type of Green Beret operation.