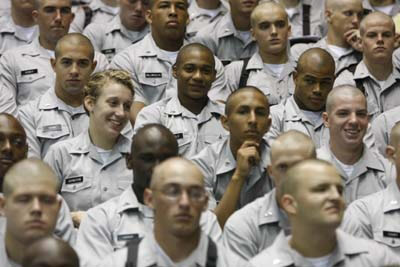 You can see how the new Citadel students might earn the name knob, based on their buzzcuts.
Photo courtesy Russell K. Pace/The Citadel

­Each August in Charleston, S.C., new stude­nts leave their families behind to enter a college that's very different from most others -- The Citadel, more formally known as The Citadel, the Military College of South Carolina. Once they pass through the school's gates, they leave their civilian clothes behind and don the uniform and life of a cadet in the South Carolina Corps of Cadets.

Besides losing their street clothes, they lose their hair; men's hair is cut to within a quarter inch (0.6 centimeters) of the scalp, while women's hair is cut to within 3 inches (7.6 centimeters). Their requisite new haircuts earn all new fourth-class students the title knob, so named because their bald heads resemble doorknobs. Upperclass cadets don't address them by their first names, but by Knob - last name.

­After knob parents leave, avoiding emotional displays in front of company officers, as the parental newsletter recommends, the knobs begin a year of intense military training, physical activity, academic studies, duties, discipline, emotional stress and endurance. According to The Citadel's internal attrition reports, about 16 percent won't make it through that first year. Some get homesick or decide the disciplined environment isn't for them; others leave for academic or financial reasons. Most, however, will stick it out to Recognition Day, which marks the end of the fourth-class year. After four years, about 62 percent of all enrolled cadets will graduate; that's the highest four-year graduation rate among public colleges in South Carolina [source: The Citadel].

Why would someone subject himself or herself to this type of intense year? It's a far cry from gaining the freshman 15 and the other adventures of a clueless student during that first year of college. One reason is that many applicants are driven to meet the challenge of this demanding training, sort of like the bragging rights associated with surviving boot camp or running a marathon.

Other students may enter The Citadel for the leadership opportunities. The school's philosophy is that to become a leader, you first must learn to be a follower (thu­s, that intense first year). Still other cadets may be continuing a family history of military careers, simply looking for a good education or some combination of all of the above.

­What types of intense training do cadets undergo? What is the South Carolina Corps of Cadets, and how did it become associated with The Citadel? Keep reading as we delve into the storied history of life at The Citadel, starting with how it came to be. 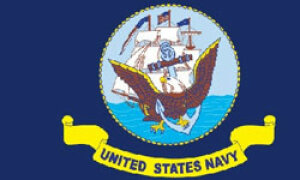