Anatomy of an IED 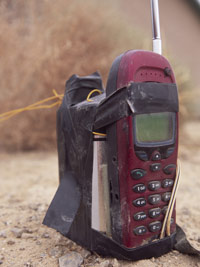 A cordless phone is a popular remote trigger for an IED since it may allow a signal to be transmitted up to a mile.
Ed Darack/­Getty Images

Before we pick apart an IED, a refresher on more conventional bombs might be handy.

Such bombs are commercially made. Armies purchase these weapons from defense contractors for military and training operations, although other individuals can obtain them through the thriving black market for weapons.

­In contrast, IEDs are homemade with five basic parts:

Additional components packed in the device may include projectiles for shrapnel, such as ball bearings, nails and stones, as well as hazardous, toxic or fire-starting chemicals. IEDs may also be used as the explosive part of a biological or radioactive dirty bomb.

Let's look at how these parts work together:

Here's the distressing part: IEDs are relatively simple to make with a little research, time and training. After all, how hard is it to get batteries, cell phones and radios? Detonators and explosives such as C-4, Semtex and dynamite can be found at construction sites and oil rigs. They also may be stolen, purchased legally or cooked up at home or in a makeshift lab. Terrorist groups have been known to post recipes on their Web sites.

Once made, people tend to use one of three methods for delivering their weapon. Often they'll conceal the device in a package that may be in plain sight, hidden or buried. Insurgents have even hidden IEDs in animal carcasses alongside military convoy routes. They may also place the IED in a vehicle's trunk (vehicle-borne IED or VBIED). A driver may park the vehicle alongside a convoy route. A remote watcher can then detonate the VBIED from a safe distance. The last delivery method relies on a suicide bomber. The suicide bomber may drive a VBIED into the target area and explode it or strap the device on his or her body, walk into the intended target area and explode it.

What happens when an IED explodes?