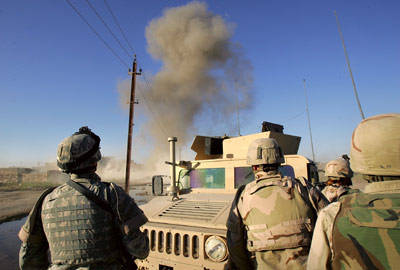 ­Insurgents and terrorists don't just go make a bomb and use it. IED attacks are the result of coordinated enemy activities such as financing, obtaining supplies, making IEDs, and planting and detonating them. So defeating these devices must involve a combined strategy of understanding and observing the enemy. Soldiers and personnel have to be trained to be aware of the enemy's behaviors, to look for indicators of IEDs in their patrol areas and to use technology to dispose or disable them. The U.S. Army's IED defeat strategy includes the following measures:

Training soldiers to be keen observers in combat operations is important. For example, a U.S. Marine spotter near Habbaniyah, Iraq, noticed a man who was videotaping a nearby patrol of assault vehicles. The man had a high-powered rifle in his car next to him. After a sniper shot the man, soldiers discovered a cache of IED materials and munitions in the car.

A Category I (left) and Category II Mine Resistant, Ambush Protected vehicle (MRAP) drive through an off-road course during a demonstration in Aberdeen, Md. There's been a huge demand for the vehicles in Iraq.
Chip Somodevilla/­Getty Images

­Likewise, soldiers or other personnel should be trained to be suspicious of unattended packages along a road, fence, building or even a trash pile. IEDs are easy to hide. Simulating more IED attacks during military training will help soldiers to detect and deal with these attacks before encountering them in combat.

Besides training soldiers, some new technologies are capable of detecting, disrupting or disabling IEDs. These technologies are designed to place a "bubble" of protection around troops operating in combat situations. For example, many combat vehicles are now equipped with radio frequency jamming devices, which disrupt the cell phone signals often used to trigger IEDs.

Another device called a NIRF, which stands for neutralizing improvised explosive devices with radio frequency, emits a high frequency radio pulse that deactivates IED electronics within a short area. Microwave-pulsing devices also can be used to "fry" the electronics of IEDs. Another device called LIBS (laser-induced breakdown spectroscopy) uses lasers to detect IED explosives within a 100-foot (30-meter) radius.

Alternatively, you might not need a soldier to deal with a suspected IED at all. The military is exploring using robots and drones to protect people from IEDs. Aerial drones may be able to detect IEDs or suspicious activities without exposing troops, while robots can search areas for the suspected devices or handle shady looking packages without involving soldiers.

What about protecting soldiers during an attack if the detection methods fail? Kevlar body armor has shielded soldiers from the shrapnel released in an IED explosion. In addition, armored vehicles have been redesigned with the blast impacts of an IED in mind. These vehicles are called Mine Resistant Ambush Protected (MRAP) vehicles. Essentially, the usual flat undercarriage of a vehicle is changed to a V-shaped undercarriage, which diverts the blast waves from an explosion underneath around the vehicle rather than into it. Because IED attacks are a favored strategy in modern war, the U.S. Department of Defense continues research aimed at IED countermeasures.