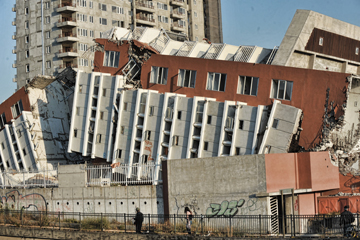 Photo of a building destroyed in the Chile earthquake of 2010. Is there a way to make buildings earthquake-proof? See more earthquake pictures.
MARTIN BERNETTI/AFP/Getty Images

In February 2010, an 8.8-magnitude earthquake -- one so powerful it altered Earth's axis and shortened the length of a single day -- caused the deaths of more than 700 people in Chile [source: Than].

Tragic as this was, one scant month earlier a 7.0-magnitude earthquake hit Haiti and killed more than 200,000. How could a less powerful earthquake kill more people?

Chile has more stringent building codes than Haiti, as well as the financial means to follow them. The result? Chile has a greater number of earthquake-resistant buildings, fewer of which are likely to collapse on their inhabitants [source: Sutter].

There is a big difference, however, between an earthquake-resistant building constructed to remain standing, even if damaged and an earthquake-proof building engineered to survive ground-shaking events unscathed. An earthquake-resistant building is reinforced so that it doesn't crumble into rubble (which allows people to escape); an earthquake-proof structure has additional features designed to protect it during sideways shifting. This shifting is a common occurrence during earthquakes because seismic waves and vibrations cause buildings to sway to increasing angles until they fail. The taller the building, the more movement its top floors will exhibit during an earthquake. If the building begins to sway in such an extreme motion that it bends beyond its elasticity, it will snap [sources: Reid Steel, Structural Engineers Association of Northern California].

The principle behind earthquake-proof buildings is similar to that of the willow tree, a variety known for its resilience. Strong winds may buffet the tree, causing it to bend, but it rarely breaks. Buildings designed and built to be earthquake-proof follow nature's example.

The success of earthquake-proof buildings lies in their resiliency. Therein also lies the challenge. While we can take our cues from nature, man-made construction materials behave differently. Trees bend, bricks don't.

So what, exactly, would make a building earthquake-proof? From raw materials imbued with the ability to expand and contract, to vibration-absorbing foundations and space-age spiderwebs, there's been an influx of ideas designed to prevent buildings from collapsing during earthquakes.

But implementing them often comes down to money.