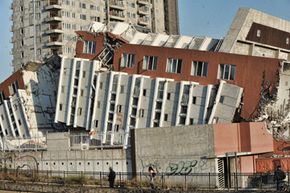 Photo of a building destroyed in the Chile earthquake of 2010. Is there a way to make buildings earthquake-proof? See more earthquake pictures.
MARTIN BERNETTI/AFP/Getty Images

In February 2010, an 8.8-magnitude earthquake -- one so powerful it altered Earth's axis and shortened the length of a single day -- caused the deaths of more than 700 people in Chile [source: Than].

Tragic as this was, one scant month earlier a 7.0-magnitude earthquake hit Haiti and killed more than 200,000. How could a less powerful earthquake kill more people?

Chile has more stringent building codes than Haiti, as well as the financial means to follow them. The result? Chile has a greater number of earthquake-resistant buildings, fewer of which are likely to collapse on their inhabitants [source: Sutter].

There is a big difference, however, between an earthquake-resistant building constructed to remain standing, even if damaged and an earthquake-proof building engineered to survive ground-shaking events unscathed. An earthquake-resistant building is reinforced so that it doesn't crumble into rubble (which allows people to escape); an earthquake-proof structure has additional features designed to protect it during sideways shifting. This shifting is a common occurrence during earthquakes because seismic waves and vibrations cause buildings to sway to increasing angles until they fail. The taller the building, the more movement its top floors will exhibit during an earthquake. If the building begins to sway in such an extreme motion that it bends beyond its elasticity, it will snap [sources: Reid Steel, Structural Engineers Association of Northern California].

The principle behind earthquake-proof buildings is similar to that of the willow tree, a variety known for its resilience. Strong winds may buffet the tree, causing it to bend, but it rarely breaks. Buildings designed and built to be earthquake-proof follow nature's example.

The success of earthquake-proof buildings lies in their resiliency. Therein also lies the challenge. While we can take our cues from nature, man-made construction materials behave differently. Trees bend, bricks don't.

So what, exactly, would make a building earthquake-proof? From raw materials imbued with the ability to expand and contract, to vibration-absorbing foundations and space-age spiderwebs, there's been an influx of ideas designed to prevent buildings from collapsing during earthquakes.

But implementing them often comes down to money.

Many of the existing structures situated along earthquake-prone fault lines aren't designed to withstand significant ground-shake. While a few have been shored up with reinforced shells or strengthened internal frames, most have not been done simply because of the cost.

However, that could change. In San Francisco, for example, a 2013 law requires property owners to retrofit wood-frame soft-story buildings at least three stories high that were built before 1978. The city estimates it could cost between $60,000 and $130,000 to retrofit a building. Building owners are complaining about the price, as are some tenants rights' groups which fear rents will increase as costs are passed on [sources: Lin, City and County of San Francisco].

Traditional methods of reinforcing a building relied on strengthening the beams and columns and building the walls with braced frames. But newer methods focus on the foundations. Take the world's largest earthquake-safe building, for instance. At Istanbul's Sabiha Gökçen Airport, a 2-million-square-foot (185,806-square-meter) terminal functions much like a giant roller skate. Instead of being tied to the soil with a traditional foundation, the terminal sits atop more than 300 bearings, known as isolators, on which it will roll during an earthquake. This allows the massive building to move as a whole during a ground-shaking event, rather than undulating in an uneven -- and destructive -- fashion. Essentially, the isolators act as shock absorbers while the structure slowly rolls to and fro, skirting damage during earthquakes up to an estimated 8.0 magnitude [source: Madrigal].

Isolating a building's base, and then dissipating the energy of an earthquake as it travels underneath the building, is key in creating earthquake-proof buildings. In addition to bearings, such as those used under the airport in Istanbul, there are other isolator systems. One such system relies on just a few bearings that travel along curved rubber pads between a structure and its foundation, allowing the base to move during an earthquake while minimizing the movement of the structure itself. Other devices focus on dissipating the energy caused by ground movement, acting as giant shock absorbers between the foundation and building [source: MC EER].

While this technology is becoming more commonplace, it still adds significantly to the building's bottom line. An architectural Web site estimated it would cost $781,000 to retrofit a high school and $17,000 for a 2,300-square-foot (213-square-meter) house [source: Kuang]. If building owners and contractors in the U.S. find the outlay for earthquake-proofing a building high, imagine what this must mean in developing nations.

However, there are ways to apply these principles inexpensively. Safer structures can be built using reclaimed materials like tires filled with stones and placed between the floor and foundation. Walls can be reinforced with natural, flexible materials like bamboo or eucalyptus. And weighty concrete roofs can be replaced with flexible sheet metal on wooden trusses [source: National Geographic]. 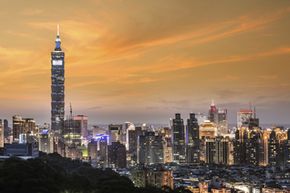 Sunset view of the Taipei 101 tower in Taiwan.
VII-photo/E+/Getty Images

Although you can't guarantee any building can withstand any earthquake – it would depend on the magnitude of the disaster – there are certainly construction practices that increase the chances that a building will survive intact. We've mentioned some of them already but there are others.

Taipei 101, a 101-story structure in Taiwan, was built near a massive fault line. It's designed to withstand not only earthquakes, but also the country's frequent typhoon-force winds. The solution? A huge internal pendulum. Inside Taipei 101, a suspended 730-ton (662-tonne) steel ball begins to swing when the building sways, neutralizing its movement [source: Tech News].

Or consider a remarkably simple idea being developed to protect residential homes against earthquake destruction. Air Danshin, a Japanese company, is testing the benefits of a home that sits atop a deflated airbag. When the airbag's sensors detect ground movement, an air compressor fills the bag and lifts the home off its foundation within a few seconds. While the concept performed well during simulated tests and is thought to be effective during a minor lateral-shaking earthquake, critics doubt the costly airbag would protect a structure during a major earthquake [source: Abrams].

Increasingly, researchers think that the blueprint for durable buildings could come from a blend of nature and science. Super-strong naturally occurring substances, such as spiderwebs or mussel fibers, could inspire the next generation of earthquake-proof buildings.

Spiderwebs are pound-for-pound sturdier than steel; plus, they can bend and stretch without snapping. The cable-like fibers of the blue mussels found along the coast of New England, for example, anchor the creatures to underwater rocks despite occasionally violent waves.

The combination of strength and flexibility in spiderwebs and mussel fibers are what engineers need for resilient buildings, too. The advent of 3-D printing, a method that sprays a material onto a surface in layers to create a three-dimensional object, could lead to the manufacturing of building materials that are firm, yet flexible -- and perfect for withstanding earthquakes [sources: Chandler, Subbaraman].

Author's Note: Will buildings ever be truly earthquake proof?

We don't get many earthquakes in the Midwest, but I've felt at least one. One summer at about 9 p.m. as I was walking through the bedroom, the wooden bed frame began to shimmy. I was just about to blame the dog for jumping into forbidden territory and causing the bed to shake, when I noticed he was still on the carpet. And looking just as surprised as I was. About the time it dawned on me that it was, indeed, a very minor earthquake, it was over. Although my experience was brief, it made an impression. And gave me a taste of the destruction that could easily occur.

What is the Missing Number?

Riddle: What Has an Eye but Cannot See?

Up Next
Earthquake
Explore More 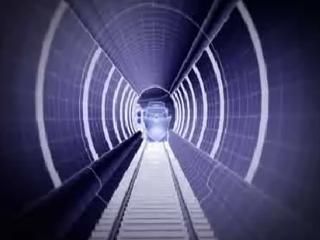 You May Like
How Earthquake-resistant Buildings Work
Explore More 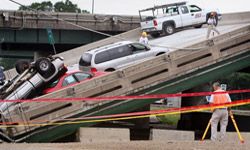