The Implications of Quantum Physics 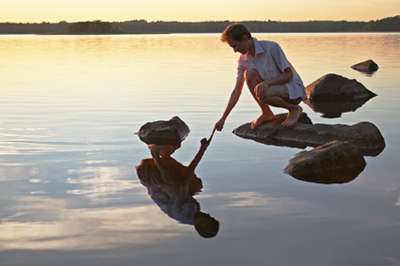 As our understanding of quantum physics deepens, how will it change our perception of the physical world?
Photo courtesy Daniel Johansson

When compared to classical science and Newtonian physics, the theories pr­oposed to explain quantum physics seem insane. Erwin Schrödinger himself called his cat experiment "quite ridiculous" [source: Goldstein, Sheldon]. But from what science has been able to observe, the laws that govern the world we see every day don't hold true on the quantum level.

Quantum physics is a relatively new discipline, dating back only to 1900. The theories that have been posed on the subject are all just theories. What's more, there are competing theories that give different explanations for the peculiar happenings that take place on the quantum level. Which one will history show is the correct one? Perhaps the theory that proves to be the true explanation for quantum physics hasn't been posed yet. The person who poses it may not have even been born yet. But given the logic that this field of study has established, is it possible that all theories explaining quantum physics are all equally true at the same time -- even the ones that contradict each other?

Niels Bohr's Copenhagen interpretation of quantum physics is perhaps the most comforting theory put forth. By explaining that particles exist in all states at once -- in coherent superposition -- our understanding of the universe is put slightly askew, but still remains somewhat comprehensible. Bohr's theory is additionally comforting because it makes us humans the cause for an object to take a determined shape. Although scientists find a particle's ability to exist in more than one state frustrating, our observations affect the particle. At least it doesn't continue to exist in all states while we're looking at it.

Much less comforting is Everett's Many-Worlds interpretation. This theory takes out of our hands any power over the quantum universe. Instead, we are merely passengers of the splits that take place with each possible outcome. In essence, under the Many-Worlds theory, our idea of cause and effect goes out the window.

This makes the Many-Worlds interpretation somewhat disturbing. If it's true, then in some universe parallel to the one we currently inhabit, Adolf Hitler was successful in his campaign to conquer the world. But in the same token, in another universe, the United States never dropped atomic bombs on Hiroshima and Nagasaki.

The Many-Worlds theory also certainly contradicts the idea of Occam's razor, that the simplest explanation is usually the correct one. Even stranger is the implication by the Many-Worlds theory that time doesn't exist in a coherent, linear motion. Instead, it moves in jumps and starts, existing not as a line, but as branches. These branches are as numerous as the number of consequences to all of the actions that have ever been taken.

It's tough not to imagine what our understanding of the quantum world will prove to be. The theoretical field has already progressed tremendously since its inception more than a century ago. Although he had his own interpretation of the quantum world, Bohr may have accepted the later theory that Hugh Everett introduced concerning the Many Worlds. After all, it was Bohr who said, "Anyone who is not shocked by quantum theory has not understood it."

For more information on quantum suicide, including related HowStuffWorks articles, visit the next page.