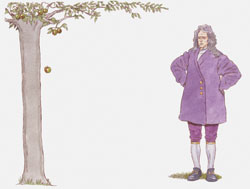 You may know Sir Isaac Newton (1642-1727) as "that apples-and-gravity guy," but the inscription on his tomb at Westminster Abbey hints at far greater wonders. According to the carved Latin script, interred within are not merely the bones of a great man, but the bones of the greatest man who ever lived.

"Mortals rejoice," it reads, "that there has existed such and so great an ornament of the human race!"

Even for a eulogy, you have to admit that's a ridiculous level of praise -- or so it seems at first.

Born the son of an uneducated farmer, Newton died a true polymath -- a celebrated master of astronomy, chemistry, mathematics, physics and theology. His endless curiosity led him to tackle problems as minuscule as rug-peeing cats and as grandiose as humanity's ultimate purpose in the cosmos.

Newton's many inventions, discoveries and harebrained notions provide a glimpse into a legendary mind. Let's kick things off with a bang.