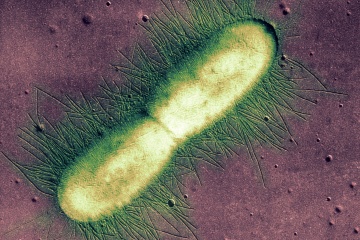 An E. coli bacterium is captured in the early stages of binary fission, or splitting into two identical cells.
CNRI/Science Photo Library/Getty Images

How do bacteria create colonies in the first place?

Bacteria, like other forms of life on Earth, need to make copies of themselves to survive. While humans and other organisms do this through sexual reproduction, it works a bit differently with bacteria.

But first, we'll discuss why diversity is a good thing.

Life undergoes natural selection, or selective forces in a given environment that allow one type to thrive and reproduce more. As you might recall from biology class, genes are the units that instruct a cell what to do — whether to make your hair color brown or blonde or your eyes green or blue. You get genes from both of your parents that provide a good mix. In addition, sexual reproduction gives rise to mutations, or random changes in the DNA, which creates diversity. The more genetic diversity from which to draw, the more likely an organism can adapt to constraints in an environment.

For bacteria, reproduction isn't a matter of meeting the right microbe and settling down; it's simply replicating its own DNA and dividing into two identical cells. This process, called binary fission, occurs when a single bacterium cleaves itself into two after it replicates its DNA and moves the genetic material into opposite ends of the cell.

Because the resulting cell is genetically identical to the one it came from, this method of reproduction isn't exactly the best way to create a diverse gene pool.

So how do bacteria get new genes?

It turns out bacteria employ tricks to get the job done, with the end result being horizontal gene transfer, or exchanging genetic material without reproducing. There are a few ways bacteria can do this. One method involves picking up genetic material from the environment outside the cell, relying on other microbes and bacteria (through molecules called plasmids). Another results from viruses that use bacteria as hosts. Upon infecting new bacteria, the viruses incidentally leave genetic material of previous bacteria in the new one [source: Marraffini].

Swapping genetic material gives bacteria the flexibility to adapt — and some do, once they sense stressful changes in the environment such as food shortages or chemical changes.

Developing a better understanding of how bacteria adapt is tremendously important for understanding and combatting bacteria's resistance to antibiotics in medicine. Bacteria can exchange genetic material so frequently that treatments that previously worked likely won't next time.

Now that we've taken a close look at how bacteria work at a microscopic level, let's take a step back to see where you find them in the big picture.