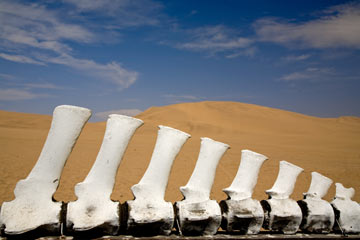 Will life become a thing of the past?
Donald Nausbaum/Photographer's Choice/Getty Images

There was a time when our planet was devoid of life. Nothing swam through its murky, blue-green seas. Nothing grew on its rocky continents nor soared through the reddish skies overhead. This was the prebiotic Earth.

Then the first primitive life forms evolved in the planet's oceans. They were simple, unicellular creatures, capable of tremendous adaptation. The organisms grew and spread, developing into countless varieties of life and altering the chemistry of the planet in the process.

Yet life's 4-billion year rule on this planet hasn't come uncontested. Evolution can't keep pace with rapid environmental change or protect us from certain extraordinary events. At least five separate extinction episodes have threatened life on Earth, destruction brought on by both cosmic bombardments and the planet's own internal turmoil.

But how long can our luck hold out? Certainly life is durable and adaptive, able to thrive at lightless ocean depths and chilling atmospheric heights, but at what point will Earth return to its sterile, prebiotic roots?

Fortunately, technology gives humans the opportunity to safeguard life on Earth against many cosmic threats. For example, by mapping near-Earth objects and developing asteroid and comet mitigation strategies, scientists hope to prevent future catastrophic impacts. This doesn't mean we're safe from the dangers of outer space, however.

Keep reading to learn a little more about what some of those dangers might be.

Threats to Life on Earth

If a sufficiently large, nearby star were to burn out, the resulting hypernova could theoretically blast the Earth with enough gamma radiation to destroy the ozone layer. That destruction would expose us to deadly doses of solar radiation [source: Dillow].

An orange dwarf dubbed Gliese 710 poses yet another threat to Earth. Astronomers predict this rogue star may barrel into our corner of the galaxy roughly 1.5 million years from now, shredding the Oort Cloud on the outskirts of our solar system and pelting us with comets formed from the impact [source: O'Neill].

Even the Earth's own sun poses a threat to life. In roughly 7.6 billion years, the sun will burn through the last of its fuel and swell into a red giant. In this form, the sun's diameter will encompass the Earth's current orbit and vaporize the planet. Yet even before this occurs, scientists predict the sun's slow expansion will raise temperatures and boil the oceans dry [source: Korycansky]. In other words, Earth could be a desert world in a mere 500 million years [source: Cain]. Some estimations predict that the Earth, unbound by the sun's decreased mass, will drift out into an outer orbit, safe from the expansion of the sun. The oceans might freeze solid, but some organisms might survive near hydrothermal vents [source: Britt].

Given sufficient technological advancement, future inhabitants of Earth might even be able to engineer a deliberate orbital shift for the planet. We could survive the big move. However, this wouldn't be the only planetary fixer-upper project for our far-future descendants. Eventually the liquid portion of the Earth's core will solidify, depleting the planet's magnetic field and the protection it affords against lethal solar radiation.

Perhaps future civilizations will attain the dizzying technological heights necessary to stave off change in a changing universe. Perhaps they'll prove themselves true guardians of our living planet. Yet cosmologists stress the long-term survival of life rests in our ability to expand not only beyond our planet and solar system, but beyond the universe itself.

Nothing, it would seem, lasts forever.

Explore the links on the next page to wrap your mind around even more big questions about life and the cosmos.

Climate change can certainly cause extinction, but only environmental changes rooted in cosmic or geologic catastrophe pose a risk for life itself. Likewise, while future generations might develop technology capable of accidently ending all life on Earth, even the most extreme models of nuclear winter and fallout wouldn't kill everything.