The Many Types of Symbiosis 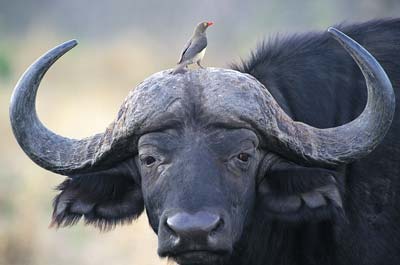 Oxpeckers eat the parasites off of large animals like this African buffalo. But they're also parasites themselves, keeping wounds open and picking at scabs.
Natphotos/Digital Vision/Getty Images

The traditional definition of symbiosis is a mutually beneficial relationship involving close physical contact between two organisms that aren't the same species. Most biologists still adhere to this definition. Some biologists, however, consider any interspecies relationship involving frequent close contact to be symbiosis, regardless of which of the organisms benefits. This includes commensalism, in which one organism benefits and the other isn't affected much at all, and parasitism, in which one organism benefits and the other is harmed. In this article we're going to focus on mutually beneficial symbiosis.

The "close physical contact" part of the definition is worth looking at more closely. In most cases, it's fairly straightforward -- one organism may make its home directly on another organism's body, or even live inside it. But biologists also consider the biochemical relationship between two organisms. If they're generating and sharing enzymes, proteins, gases or other chemicals then they can also said to be symbiotes.

Endosymbiotes live inside another organism. And by inside, biologists really mean inside -- in between cells or within the body tissues (like the acoel flatworm). Ectosymbiotes live on the body of another organism. (Note that organisms that live within another's digestive tract are considered ectosymbiotes. Apparently living in someone's else's intestines doesn't qualify as a close enough relationship for biologists to call them endosymbiotes.)

No Fungus, No Tree

Plants and fungi occupy completely different categories in taxonomy. Yet their lives are so utterly entwined that about 90 percent of all the plants in the world have their own fungal “partners” that allow them to survive [source: Wakeford]. The fungus in question is mycorrhizal. Many mycorrhizal varieties live in close association with trees and other plants, drawing in nutrients from deep underground and providing them to the tree in exchange for a share of the energy (in the form of sugars) produced by the tree’s photosynthesis. The mushrooms and toadstools often seen around the bases of trees are actually the reproductive organs of vast subterranean fungal networks that plants tap into in order to gain nutrients more efficiently.­