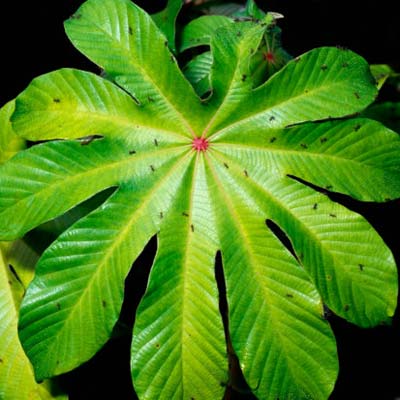 Cecropia trees have hollow trunks, and inside they secrete a sugary liquid that's nutritious to ants. Azteca ants colonize the trees, filling the trunk with millions of ants, who receive shelter and food from the tree. The tree is vulnerable to vines, which can grow on it, weigh it down or choke it. Azteca ants patrol the Cecropia and use their jaws to cut away any vines.

There are many examples of fish that helpfully clean the parasitic bacteria and fungi from the bodies (or even from inside the mouths) of other fish. The pilot fish, client fish, cleaner wrasse and seniorita fish all eat parasites from other species, gaining a nice meal. The other fish gain protection from the damage these parasites would cause if left unchecked. They not only halt aggressive behaviors to allow cleaner fish to do their work, they have been known to go out of their way to visit them.

Cleaner relationships exist out of the water as well. Egrets, oxpeckers, plovers and brown-headed cowbirds all spend a good portion of their lives riding around on other animals. The birds pick off insects, ticks and other parasites to eat. Plovers hop into the mouths of basking crocodiles to eat leeches. The animals (zebras, bison, warthogs, domestic cattle) are kept clean of harmful insects. The cleaner birds also act as an alarm system, notifying their host when danger is present.

A species of bird called the honeyguide prefers to eat beeswax and bee grubs. However, it isn't large enough to break open bee hives. To accomplish this, it finds a nearby mammal, sometimes a human or a badger-like creature called a ratel. It then hops around to get attention and then leads its "assistant" to the hive. The assistant wants the honey, so it breaks open the hive to eat it, exposing the wax and grubs to the honeyguide.

Plants need nitrogen. It's a vital nutrient, important to healthy growth. However, plants lack the mechanism to extract nitrogen from the air. They can get it from the ground if the ground happens to be fertile, but the supply can be easily depleted. In a perfect example of the "evolution's toolbox" aspect of symbiosis, certain plants have found another species that does have the ability to extract (or "fix") nitrogen from the air. Legumes, a plant family that includes potatoes, peanuts and many others, bond with rhyzobia bacteria. The bacteria actually grows in nodules on the legumes' roots. The legume provides the energy necessary for the rhyzobia to break the strong chemical bonds in free nitrogen, and the rhyzobia produce nitrogen for the plant, plus enough to keep the surrounding soil fertile for years.

If you want to know more about symbiosis, evolution, natural selection and other cool stuff about animals, try the next page.

The Gaia theory, first popularized in the 1970s, suggests that Earth itself is a living organism existing in symbiosis with all the other life forms living on it. This theory is used to explain the relatively stable environment on Earth that allows life to thrive. Temperatures, atmospheric composition, food supplies -- they may vary widely from one place to another and over time, but they tend to swing around stable midpoints.

One of the widely accepted definitions of life includes the ability to reproduce. Some Gaia theory proponents suggest that Gaia may, in fact, be capable of reproducing. Humans are now capable of leaving Earth, and we might be just a few decades away from being able to travel to other planets. Colonists on Mars would be like seeds, spreading the Earth’s biosphere to other worlds.