The Brain During Religious Experiences 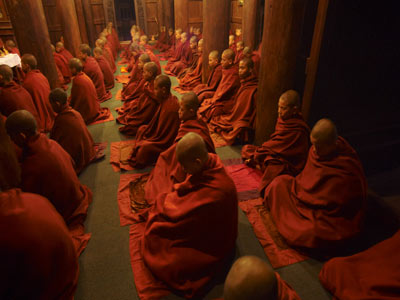 Because of the work connecting temporal lobe epilepsy and spiritual experiences, scientists previously believed that the temporal lobe was the only part of the brain involved in religious feelings. Recent imaging studies, however, have shown that many parts of the brain are activated during a religious experience.

At the forefront of these imaging studies is Andrew Newberg, a doctor at the University of Pennsylvania. Newberg used single photon emission computed tomography, or SPECT, imaging to take pictures of the brain during religious activity. SPECT provides a picture of blood flow in the brain at a given moment, so more blood flow indicates more activity.

One of Newberg's studies examined the brains of Tibetan Buddhist monks as they meditated. The monks indicated to Newberg that they were beginning to enter a meditative state by pulling on a piece of string. At that moment, Newberg injected radioactive dye via an intravenous line and imaged the brain. Newberg found increased activity in the frontal lobe, which deals with concentration; the monks obviously were concentrating on the activity [source: Vedantam].

But Newberg also found an immense decrease of activity in the parietal lobe. The parietal lobe, among other things, orients a person in a three-dimensional space. This lobe helps you look around to determine that you're 15 feet (4.6 meters) away from a bathroom, 6 feet (1.8 meters) away from a door and so on. Newberg hypothesizes that the decreased activity in the brains of the meditating monks indicates that they lose their ability to differentiate where they end and something else begins [source: Paulson]. In other words, they become at one with the universe, a state often described in a moment of transcendence.

And it seems to matter little to whom or what that religious activity is directed toward, for Newberg found similar brain activity in the brains of praying nuns. Though the nuns were praying to God, rather than meditating like the monks, they showed increased activity in the frontal lobe as they began focusing their minds. There was also a decrease of activity in the parietal lobe, seemingly indicating that the nuns lost their sense of self in relation to the real world and were able to achieve communion with God [source: Paulson].

There were, however, slight differences in the brain activity of one religious group: Pentecostal Christians who speak in tongues. The Pentecostals actually experienced a decrease in frontal lobe activity; instead of focusing their attention as the nuns and monks did, they paid less attention to the task at hand [source: Carey]. Even though they spoke in tongues, the language center of the brain wasn't activated [source: Paulson]. This brain activity is fairly consistent with descriptions of what speaking in tongues is like -- you lose control of yourself as a person, and God speaks through you.

While Newberg's work has been supported by other scientists conducting imaging studies, some have a problem with the basis of the experiment. Critics of Newberg's work argue that you can't reduce all religious behaviors to just meditating or praying [source: PBS]. Religion encompasses more than that. What, for example, might happen in the brain of someone doing charity work for the poor? What happens when someone makes a moral choice based on his or her belief system? Newberg's work as of yet is focused on individual, private experiences, as opposed to the relationships and experiences that happen between other people [source: Peters].

­­Others are more concerned with the implications of the study. If religion is just an activation of certain parts of the brain, does that mean God or any higher power is just in our heads? That's not necessarily what scientists are trying to prove or disprove. After all, if we are wired to believe in God, then it's not a far leap to believe that God is the one who wired humans that way. But if we have this structure, is there any way to tinker with it so that we can have mystical experiences all the time? And is there any benefit to this brain structure in the first place? Go on to the next page to find out.